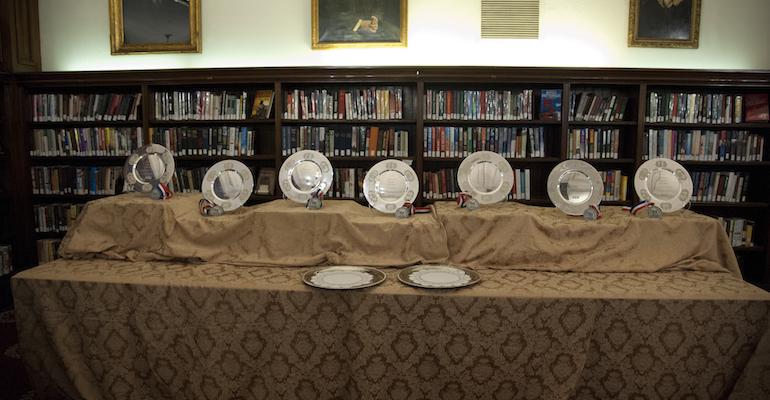 This year’s class of Silver Plate winners was announced today at IFMA’s COEX conference in Las Vegas. The winner will be honored at the NRA Show on Saturday, May 21, at the Revel Fulton Market, where one of the nine honorees will be named the year’s Gold Plate winner.

This year’s winners are:

Diane Imrie, director of nutrition services at the University of Vermont Medical Center, won for her dedication to creating a world-class sustainable hospital dining program. Her accolades include purchasing as much local and sustainable product as possible to managing a rooftop garden and establishing the Center for Nutrition and Healthy Food Systems, an initiative aimed at educating other healthcare institutions about building a sustainable foodservice operation. Imrie was Food Management’s Healthcare Innovator of the year in 2012. Most recently, Imrie opened the Garden Atrium, a retail operation that focuses on seasonally inspired dishes that highlight the rooftop garden’s fresh produce.

Jeff Denton, director of child nutrition programs at Ponca City Public Schools in Oklahoma, won for his dedication to nutrition education for his students. Denton was FM’s K-12 Innovator of the Year in 2013. From his willingness to make personal visits in each school to hosting summer cooking classes, Denton has increased consumption of fruits and vegetables by 60 percent. He has also used his chef’s background to create innovative programs like Layers of Flavor (think a Chipotle-style, build-your own option) and On The Fly, a healthy grab-and-go concept. Denton also exhibited financial prowess, including meeting a district-mandated 10 percent increase for staff salaries while also maintaining a district surplus of $750,000 at the start of the 2015-2016 school year.

Rafi Taherian, associate vice president of Yale Hospitality, won for his turnaround of the dining program at Yale University. After taking over the account in 2008 and making it self-operated, Taherian and his team have build a dining program that focused on creating memorable and craveable experiences. From creating a sustainable dining program (over 40 percent of food is purchased through local sources committed to sustainability, for example), focusing on good-tasting food (Yale is the only university to have a Certified Master Chef on its team) and constantly creating new retail operations, Taherian has increased total foodservice revenue by 42 percent since taking over the account. You can go on a tour of Yale’s dining program here.

Mike Barclay, president of Southern Foodservice Management, won in the Business and Industry Category. Barclay has spent his entire 40-year career with Southern, including the last three in his current position. During that 40-year span, Southern has achieved an annual growth rate of 8 percent, without acquisition of competitor companies. Barclay also served as the president of SFM (now SHFM) in 1986. Under Barclay’s leadership, Southern has expanded its Smart Cuisine Healthy Dining Options to tailor menus to each client’s employee preferences. The company’s Southern Cares—Sustainable Solutions includes options like onsite composting and light sensors in dry storage areas.

Rick Abramson, executive vice president and COO for Delaware North, won in the Specialty Category. Abramson has spent his entire 47-year career at the contract management giant, which specializes in sports, entertainment and recreation facilities. Abramson has been in his current position for the past two years. Under Abramson’s leadership, the company’s sports hospitality division experienced record growth, with annual revenues nearly tripling between 2004 to 2012, to exceed $760 million. The division is injecting local flavor and culinary innovations in its sporting venues, including the two-foot “Boomstick” hot dog in Globe Life Park in Arlington, Texas.