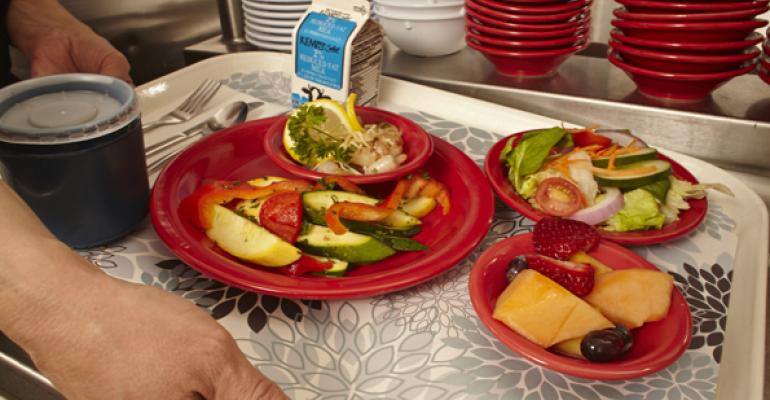 Mercy Medical Center has achieved customer satisfaction scores over 90 for its foodservices for five years and counting.

Back in 2008, Cedar Rapids, IA, suffered a tragedy when the city was devastated by an overflowing Cedar River. Among the structures affected was Mercy Medical Center, which had its basement level flooded and power knocked out, forcing the evacuation of patients.

The flood interrupted a remodeling of Mercy’s patient dining production kitchen, which was being converted to a room service approach from its traditional trayline operation.

Remarkably, the flood did not interrupt the target start date for the new patient dining program, which went on line as scheduled that September, offering room service meals to the 445-bed hospital’s inpatients.

But this was room service with a difference…of about 12 hours…because rather than offer the service only during the day, as most facilities do, Mercy was offering it 24/7 from the get-go.

The round-the-clock service plus the upgraded menu it offers have made a huge difference in customer satisfaction. According to Press Ganey, Mercy is one of just 15 hospitals nationwide that have achieved scores above 90% for its Food & Nutrition Services department for five consecutive years. (The score for the first quarter of 2014 was 97%, continuing the streak.)

“We were looking to fill the overnight gap for employees, to tie them into it along with the patients,” says dining services co-director Pam Oldham.

Previously, the cafeteria was open for a short period of time in the late evening to accommodate overnight staff, but it offered only a limited menu that was “not exactly top notch,” says Co-director Suzanne Lewis.

“Meanwhile, patients received box lunches if they needed something overnight, and we wanted to find something better,” Lewis adds. “For a surgical or OB patient who is ready to eat in the middle of the night, a turkey sandwich and bag of chips wasn’t really what they always wanted.”

The overnight meal service now offers the full patient dining menu to both patients and staff. For the latter, the service, open from 9 p.m. to 5 a.m., lets them call orders down to the kitchen and then pick them up when ready. Patients, of course, get their orders delivered.

The kitchen maintains a two-person staff overnight that is set up with both the retail POS system to charge staff meals and software to take patient room service orders. It fields an average of 90 to 100 staff meal orders and up to two dozen patient meal orders between 9 p.m. and 5 a.m..

During the day, Mercy operates a full retail cafeteria from 6 a.m. to 7:45 p.m. It draws some 1,700 customers daily, including both staff and many visitors.

Mercy deploys its team of RDs to offer patients nutritional advice and information, while nutritional assistants work on each hospital unit from 5 a.m. to 9 p.m. to help inpatients make menu choices that are both satisfying and appropriate. They take menu orders, deliver trays and communicate with the nurses on issues like checking glucose levels before eating for patients who are diabetic.

The room service and cafeteria menus were developed with input from patients and staff input, as well as a new chef, Andy Deutmeyer, who was brought on board in 2009. One result is that many dishes are now made from scratch, including a display meal made with fresh, local ingredients that is offered each Thursday in the cafeteria.

Also added to the cafeteria offerings were a number of ethnic inspired dishes such as spring rolls and rice or noodle bowls along with Vietnamese, Indian and Korean cuisine choices.

The first hospital in the area to ditch its fryers, Mercy now uses combi ovens with convection and steamed cooking capabilities to produce dishes that are flavorful but maintain a more healthful profile.

Though Deutmeyer works primarily on the retail side he did consult on an overhaul of the patient room service menu last year. He also does public cooking demonstrations, showing patients and visitors how to prepare dishes designed to appeal to cancer patients, for example.

As a result of the recent overhaul, the room service menu now features more contemporary selections like chipotle BBQ pork and vegetarian quesadillas. Patients get a menu adapted to their diet if there are any restrictions; otherwise they get the standard menu.

“We’ve tried to incorporate some new ideas to satisfy the changing patient population,” Oldham says. “They’re not always looking for those traditional comfort foods any more.”

The one exception to the room service meal program is a group of about 50 long-term-care patients (similar to a nursing home) who get a more traditional menu instead of room service. The three regular daily meals for these patients are worked into the room service production schedule (the patients make their meal choices 24 hours in advance).

The use of local ingredients is one sign of a growing sustainability consciousness—last year Mercy purchased 21,000 lbs. of local food—at Mercy, and the dining operation also disposes of its waste responsibly, diverting 37% of trash generated in 2013, including 73 tons of organic waste, from the local landfill.