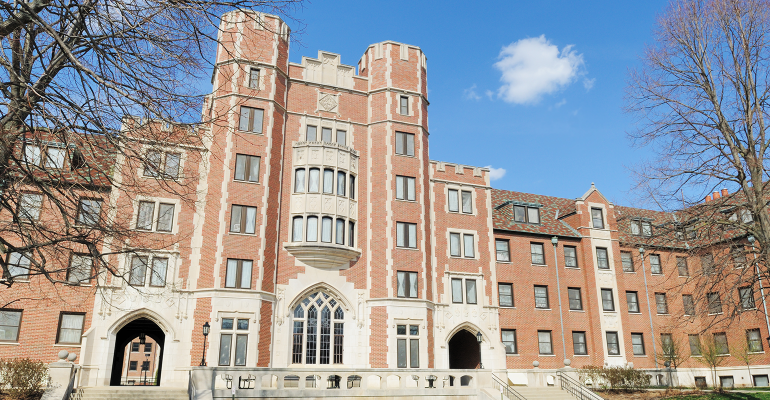 This and the adjustments in onsite dining being made by major Bay Area tech firms are some of the stories you may have missed recently regarding the COVID-19 crisis.

Related: Stories from the front lines: University of Alabama dining weathers a lean spring, looks forward to a challenging fall

Dining options at Purdue University will be undergoing significant changes on the West Lafayette campus after the school entered into an agreement with Aramark to manage retail food services. The changes, which begin this fall, include a multimillion-dollar renovation of the food court area inside Purdue Memorial Union.

Related: Dining at Ford Motor Co. copes with coronavirus now and down the line

As part of the partnership, Aramark will invest $25 million toward the complete renovation of the ground floor of the union, which includes about 67,000 square feet of dining space. The university will be adding another $10 million toward the project.

As countries around the world begin gradually reopening businesses in the wake of the coronavirus crisis, tech companies have begun asking: What do offices look like after a pandemic?

While companies like Apple have had employees reporting to the office since May, others, like Twitter and Facebook, have assured employees that while offices may reopen, employees won't be due back for the rest of the year—or longer—if they prefer staying home.

But the tech world still has to decide what to do about the hundreds of thousands of square feet of office space in their portfolios, particularly in places like the San Francisco Bay Area, where companies like Salesforce and Google are based.

Among the announced strategies, Salesforce will eliminate its "huge jars of gummy bears" and institute temperature scans on every floor, Apple is closing employee kitchens and break rooms, Facebook will offer grab-and-go meals instead of a buffet-style cafeteria and Google will stop offering breakfast and dinner, while lunch will be served out of individual lunch boxes rather than buffet style.

Read more: How tech companies from Google to Salesforce are planning to reopen offices and bring employees back to work in the wake of the coronavirus crisis

Following online controversy that led to University of North Carolina (UNC) Dining Services reversing a decision that barred students living in Ram Village Undergraduate Apartments from purchasing on-campus meal plans, some residents are questioning why the initial decision was made in the first place.

On June 10, Carolina Dining Services wrote on its “Dining FAQ” page that only students living in on-campus housing, excluding Baity Hill, Granville Towers and Ram Village, would be allowed to purchase meal plans.

On June 11, the policy had changed, with CDS releasing a statement explaining that the policy barring Ram Village students from purchasing meal plans, which was originally put in place to follow UNC policies about maintaining social distance and maximum capacity requirements, was repealed in light of student feedback.

"Earlier communications indicated that Ram Village residents would be excluded from purchasing meal plans," the statement reads. "We understand how this unanticipated decision might raise questions or concerns for these residents."

It’s generally acknowledged that the self-serve buffet’s prospects are questionable for the at least the near future, but industry leaders in commercial venues that depend on this model of service are determined to try to keep going by adapting, whether through bigger sneeze guards covering the food, switching out tongs after every use or filming your food.

For example, while most units of major buffet chain Golden Corral that have reopened are using cafeteria-style setups, where an employee fills your plate for customers, some have switched to family-style table service where large dishes of food are brought to each table, a company spokesperson said. Others, mainly in the South, have reopened buffets, but make guests wear a glove when they touch the serving utensils.

Another buffet service operator, FireKeepers Casino Hotel in Battle Creek, Mich., which before the pandemic had been serving at least 10,000 guests at its buffet each week, is considering changes like live streaming the food stations. High-resolution cameras would capture the food and the video would be displayed on a rotating basis on 70-inch TVs throughout the buffet. Then, customers would check boxes on a paper, indicating what they wanted and a server would fill their plate.

“Our whole business is people eat with their eyes. It’s not something you can just get away from,” said Mike McFarlen, vice president of food and beverage. “The buffet … it’s a visual and sensory overload. You’ve got a lot of smells and a lot of colors and dimension and variety. We just have to make sure that that isn’t lost when we transition to a no-touch buffet system.”

Read more: Is the coronavirus jeopardizing the buffet as we know it?

The John and Mable Ringling Museum of Art in Florida has announced that Metz Culinary Management will be its new food service vendor following the departure of Muse by locally owned Tableseide Restaurant Group. The Ringling’s restaurant inside its visitor center, overlooking the grounds and Circus Museum, will undergo a major facelift and revamping of the menu with a focus on fresh, locally sourced ingredients. An opening is planned for later this year.

Metz will also convert the existing coffee shop to a Starbucks, serving traditional coffee drinks, snacks and grab-and-go specials. The Banyan Cafe will reopen as a deli-style, casual eating area that will feature Boar’s Head meats and cheeses.