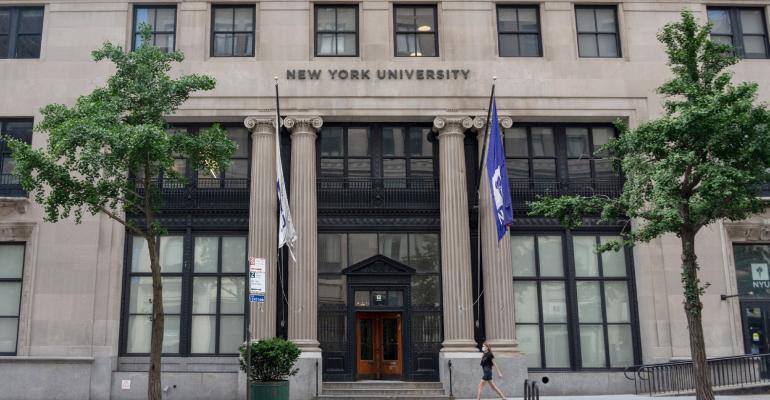 Alexi Rosenfeld / Contributor / Getty Images Entertainment
New York University is apologizing and giving gift cards to students after they complained about the poor quality of meals while quarantining in their dorm rooms.
News & Trends

This and how lack of high-speed internet access may hamper online learning this fall are some of the stories you may have missed recently regarding the COVID-19 crisis.

In the COVID-19 era, life has moved to the internet, but not everyone has it. As many districts start virtually this fall, some teachers say they’re fighting to ensure that all of their students can log into class each day. Their struggles are just one example of the consequences of America’s failure to get all of its citizens online before this uniquely internet-dependent time.

The FCC estimates that 19 million Americans don’t have a fast internet connection, but as CityLab’s Linda Poon has written, the true number may be more than double the official figure because of poor data gathering. According to the Pew Research Center, about 15% of all households with school-age children lack a high-speed internet connection. Some of these families live in areas that broadband providers don’t service, but others simply can’t afford the broadband that runs right outside their doorstep. In fact, some estimates suggest that the majority of people who don’t have internet actually live in cities and suburbs, not in rural areas.

New York University is apologizing and giving gift cards to students after they complained about the poor quality of meals while quarantining in their dorm rooms. Classes at NYU don't officially start until Sept. 2, but the university 's return-to-campus plans requires students and faculty traveling from outside the country or from restricted states to quarantine for two weeks.

While students are stuck inside their dorm rooms, the university committed to sending each day three "nutritious" complimentary meals, plus a snack, to every student, according to their website.

As companies begin considering reopening their offices during the coronavirus pandemic, they are faced with a difficult question—how do you bring employees back to work while also ensuring their safety? IBM has been dealing with this challenge since early March. The tech giant has about 350,000 employees worldwide, some of whom are considered essential workers.

Among other alterations, IBM leaders completely redesigned and restructured the cafeteria to encourage social distancing. They removed seating and added technology like a food ordering system to reduce human contact.

Workers order their food ahead of time from their phones. When it's ready, a text message is sent. This ensures there aren't long lines during lunchtime. Food workers prepare options ahead of time in containers, making ordering faster.

Read more: Take a look inside IBM's offices that have been completely reimagined since the start of the coronavirus pandemic

Voorhees High School in New Jersey had planned to have students return with a hybrid schedule, but mold discovered in the cafeteria has forced the school to change its plans, Principal Ron Peterson wrote in a letter to parents and students, who were supposed to start in-person classes this week.

Students could expect to return to the planned hybrid schedule, which includes a mix of in-person and virtual classes, with an option for online-only learning, “on or around Sept. 14,” Peterson said.