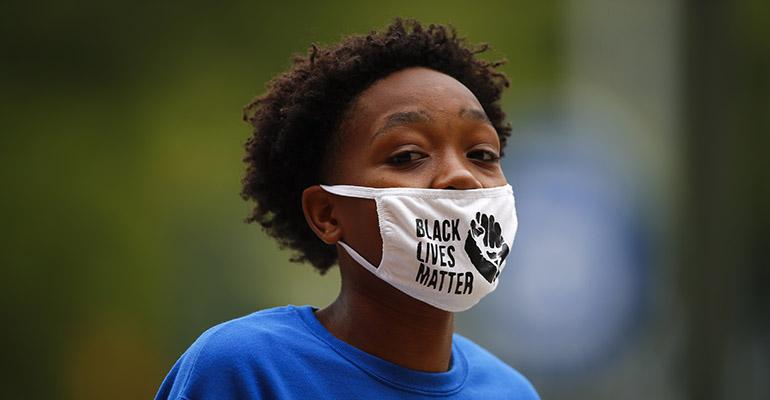 This and Oakland USD partnering with NBA star Stephen Curry on holiday meal deliveries are among the things you missed for the weeks of December 21 and 28.

A dining worker at University at Buffalo (UB) was first fired and then reinstated but suspended for allegedly violating department policy by wearing a face mask with a Black Lives Matter message. Equashia Mumeen says her manager told her she couldn’t wear the mask because UB policy requires masks with no graphics even though she says she previously saw others routinely wearing masks with various political and personal statements. The matter is awaiting review after Mumeen filed a grievance.

Following the publication of this piece, UB provided a statement on the matter to FM that includes university policy on face coverings and noting that Mumeen was not terminated for violating this policy.

The United States Department of Agriculture and the Department of Health and Human Services have issued the latest edition of their dietary guidelines, which are used as a foundation for federal nutrition programs, including school meals. The guidance states that a "healthy dietary pattern" consists of nutrient-dense forms of foods and beverages across all food groups, in recommended amounts, and within calorie limits while limiting foods and beverages higher in added sugars, saturated fat and sodium.

Read more: New US dietary guidelines include recs for babies and toddlers for first time

Oakland Unified School District partnered with Golden State Warriors star Stephen Curry’s nonprofit Eat. Play. Learn. Foundation and prepared meal vendor Revolution Foods to deliver meal and “family literacy” boxes to about 1,800 families over the winter break. The district had already provided three weeks’ worth of meals before the break, so the deliveries were via pre-arranged orders and included produce boxes and adult meals.

Celebrity chef Buddy Valestro, star of the hit culinary show “Cake Boss,” recently underwent hand surgery at New York's Hospital for Special Surgery and showed his gratitude to the staff by designing a special cake. Its design replicates the main hospital façade and also includes several hospital-scrubs mini cakes and a hand giving a thumbs up.

Read more: See what 'Cake Boss' Buddy Valastro made for the hospital staff who saved his hand

A 2,000-year-old fast-food stall unearthed from the ashes of the Roman city of Pompeii, which was buried by a volcanic eruption in 79 AD, gives a glimpse of what first century QSRs may have been like. The stall, located in a busy intersection of the city, included earthenware pots containing duck bone fragments as well as the remains of pigs, goats, fish and snails that all apparently were cooked together. Also, crushed fava beans, which were used to modify the taste of wine, were found at the bottom of one jar.

Bonus: Stories from the front lines: Bringing a Miami sandwich to Massachusetts seniors

The first story was updated to include University at Buffalo's statement about the face covering incident.
TAGS: Coronavirus
0 comments
Hide comments
Recommended Reading