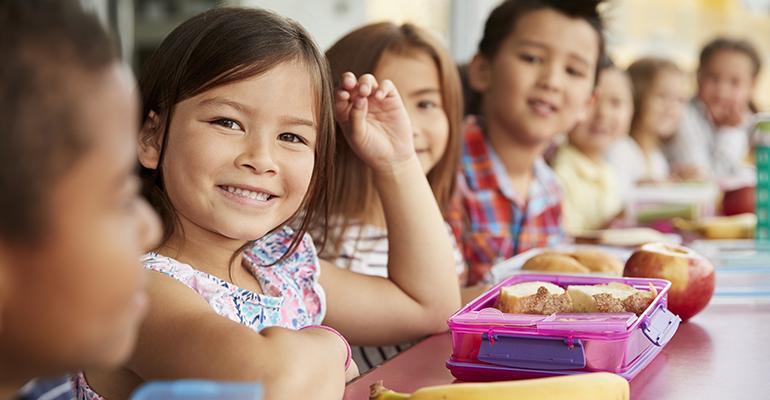 5 things: Breakfast after the bell boosts participation in Massachusetts schools

This and a price rollback at Grand Rapids Community College cafes to battle food insecurity are the things you missed for the week of January 13.

Massachusetts schools that revamped their breakfast programs last year to serve the meal after the start of the instructional day, instead of before, experienced "notable increases" in participation, according to a new state report. The Department of Elementary and Secondary Education's report analyzes the offerings of schools that were required to make breakfast available to students after the start of the school day per state budget language that stipulated that all public K-12 schools are required to serve breakfast, and where at least 60% of students are eligible for free or reduced-price meals "shall offer school breakfast after the instructional day has begun and the tardy bell rings."

"Overall, a 10 percent increase in student breakfast participation took place for all 278 schools that changed to an after the bell model" in the 2018-2019 school year, the report said. There was also a 7% increase in the total number of breakfasts served for those 278 schools.

Among the schools that made the switch, those who delivered breakfasts to classrooms had the highest participation rate—67%, up from 60% in the 2017-2018 school year. For those that served breakfast in the cafeteria, student participation moved from 35% to 38%.

Grand Rapids Community College (GRCC) in Michigan has reduced prices at two campus dining locations—Raider Grill and Sneden Cafe—to make eating on campus more affordable for students battling food insecurity. According to a press release from the school, the size of the rollback varies from item to item. For example, a basket of four chicken tenders that used to cost $5.35 is now a basket of five tenders costing $5.

“We are a part of the campus community, and we care deeply about the people we serve,” says Catering Manager Destiny Swanson. “We know it’s difficult to concentrate on studies when students are worried about their next meal. This is a step we can take to help be a part of the solution.”

The Cafeteria Burrito, a menu item introduced in mid-November at the Tumbleweeds Mexican restaurant in Richland, Wash., to raise money to pay off student meal debt in the local school district, will remain on the menu indefinitely after raising over $4,000 that helped clear all lunch debt from the district’s books. That’s because, just the day after the announcement of the debt erasure, the district said meal balances were “back in the red,” so Tumbleweeds will continue the Cafeteria Burrito with a price adjustment.

Initially, the item sold for $5 with half of that going toward the Richland School District’s Super Hero Lunch Fund, which pays off students’ negative meal balances. Henceforth, the item will sell for $6 with 50 cents from each being donated to the Super Hero Fund.

Is there a case to be made for urging employees to eat lunch away from their desks?

According to research by the British healthcare firm BUPA cited in this article, almost a third of workers in the UK usually eat lunch at their desk, with 43% saying that they were too busy to pause and take a break from their computers for even a few minutes. The consequences are worrying, with 52% of the workers claiming that missing lunch puts them in a bad mood, 40% claiming that the lack of a proper break makes them feel unproductive during the afternoon and almost a third saying they have felt physically ill at work after skipping lunch.

“Often meal breaks are a time where you are able to refresh your attention," says André Spicer, professor of organizational behavior at Cass Business School in London. “If you don't take a break in which you go away from your actual place where you're working, you're not able to get a boost in attention. Meal breaks basically allow us a productivity refresh."

In a 2012 study also cited in this article, researchers from the University of Surrey found that people who ate while distracted tended to overeat. Jane Ogden, professor in health psychology and one of the researchers on the study, even says that you don’t get as full when you eat at your desk because of work’s distractions.

“If you eat at your desk when you’re distracted through working and you’re not giving yourself a proper lunch break, then the food you eat doesn’t fill you up as much,” she says. “You don’t remember that you have eaten in the same way, and you don’t code food in the same way. You’re more likely to feel hungry in the afternoon and then eat more.”

Read more: Why you really shouldn't be eating lunch at your desk

A group of state senators in Vermont has pitched what is described as a first-in-the-nation plan to offer universal school meals across the state. The bill, S.223, would mandate that every Vermont public school provide every student free breakfast and lunch at no charge to families. An early estimate pegs the cost to the state’s education fund at about $4 million a year, according to Sen. Debbie Ingram, who is sponsoring the legislation.

“What’s happening now is that there is a hodgepodge of which schools provide one meal, or both meals, and how they pay for those meals,” Ingram said, adding that the mandate would bring consistency, equity and transparency to school meal programs.

Vermont would be the first in the nation to enact such a mandate, according to Hunger Free Vermont, which is championing the universal meals effort. Currently, 77 schools in Vermont provide universal meals to more than 16,400 students using a mix of state and federal funds, the group said.