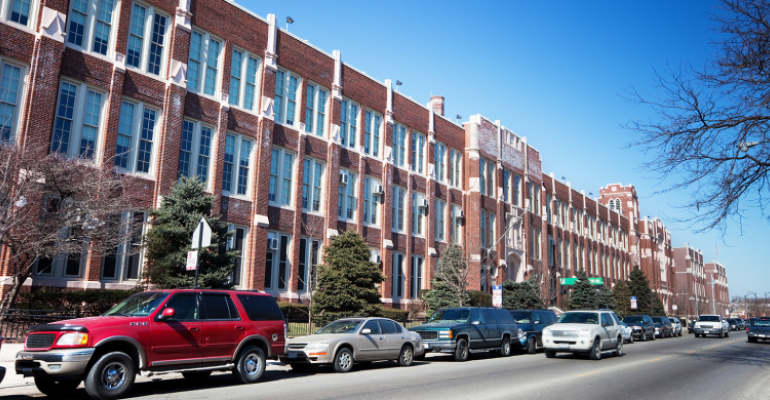 This and Mercedes Benz Stadium planning venue-wide mobile order/pickup for fans are among the things you missed for the week of May 25.

Families who need food for their children will still be able to pick up meals at schools over the summer, Chicago Public Schools (CPS) officials announced, as the city’s school board has renewed its food services contract with Aramark for $126 million, $29 million more than previous years to account for an expanded summer program.

“In prior years we operated a program called ‘LunchStop,’ which fed students at approximately 100 sites throughout the city,” CPS CEO Janice Jackson told the board. “Given the COVID crisis, we know that the need is much greater. And so today we’re going to be asking the board to approve a plan that allows us to continue serving food with our partner Aramark over the summer.”

The contract renewal with Aramark is a one-year extension of the usual food services provided to CPS, including for food and overseeing lunchroom staff. The original $97 million agreement was signed for the 2018-2019 school year with four options for one-year extensions.

Read more: Free CPS meals to continue through the summer — with $29M more to Aramark

AMB Sports and Entertainment, the parent company that oversees Mercedes-Benz Stadium in Atlanta, home of the NFL’s Atlanta Falcons, is working with NCR Corp. to create a solution that will allow fans to order from their seats using the mobile team app and then pick up at designated concession areas inside the building.

One year after installing a stadiumwide cashless system, AMB executives have turned their attention to developing the solution, which they expect to be fully functioning by next year, though AMB CEO Steve Cannon said there’s no specific launch date as of now given continued uncertainty over whether fans will be in attendance during the upcoming NFL season. He did say that the process will likely be similar to how the cashless system was slowly introduced in 2018 before a full implementation the following year.

Cannon believes the mobile ordering addition will ease the overall experience as well as help fans avoid crowded areas in the wake of the pandemic.

“All I’ll do is walk up, show a code, pick up my stuff and then I’m back to my seat,” Cannon said. “That to me will be the next big move inside of venues like ours, and we’re going all in on that as well.”.

Sodexo has announced the formation of a new Sodexo Medical Advisory Council that will provide technical guidance and validation on continually evolving and quickly emerging health and safety protocols for services, as well as the ways the company engages with people and encourages safe behaviors. In addition, the Council will provide the latest information to ensure agile adoption of best practices, aligned with local requirements.

Operating as a governance body, the council will be comprised of experts from around the world in epidemiology, family medicine, nutrition, occupational health and behavioral health, as well as pandemic planning and operations.

The board of trustees of Coastal Carolina University (CCU) has approved a motion to freeze tuition, housing fees and meal plans at the current level for the 2021-2022 academic year, resulting in no increases for the next two academic years, according to a release from the university. It will apply to all in-state and out-of-state students, CCU said.

University officials added trustees had already taken action on freezing the same costs for the upcoming 2020-2021 academic year in its regular board meeting back on May 8.

Feedr, a British food tech startup that pools meal orders from office workers and sends them to the food suppliers it works with to have them ready for delivery at lunch time, has been acquired by Compass Group, the London-based parent of No. 1 FM Top 50 firm Compass Group North America.

Compass says the purchase will help accelerate its digital transformation, and form part of its post-COVID “return to work” strategy. Specifically, it plans to utilize Feedr’s software across its portfolio of corporate clients in the United Kingdom and Ireland, with further potential applications of the technology in education and healthcare sectors.

The technology behind Feedr handles logistics planning in terms of predicting and helping to manage demand for each meal on offer from specific suppliers. There is also a large emphasis on personalized recommendations based on the preferences of individual customers and their order history, an aspect that Compass thinks also has utility when applied to on-site restaurants and cafes.

In addition to adopting Feedr’s technology, Compass says it will also invest in growing Feedr as an independent brand that will continue to operate in the delivery market with its cloud canteen product.