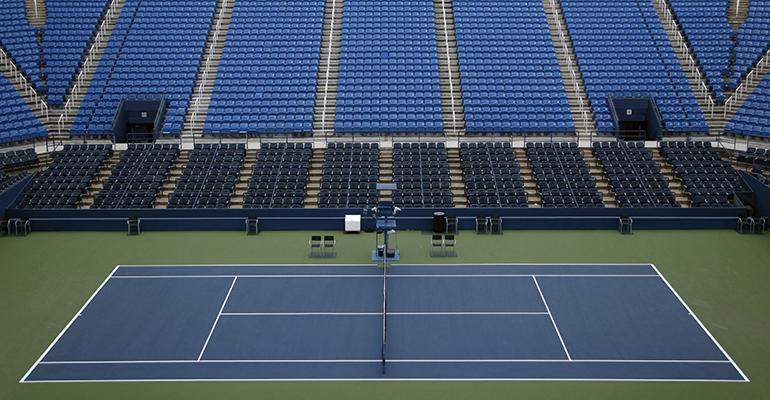 Michael Duva / Stone / Getty Images
Louis Armstrong Stadium is being utilized to prepare and distribute up to 25,000 packages of meals every day.
News & Trends

This and University of Louisiana-Lafayette feeding all campus residents for free are among the things you missed for the week of March 30.

Even as a 350-bed hospital facility is being constructed at the USTA Billie Jean King National Tennis Center, the home of the US Open in Flushing, N.Y., the complex’s Louis Armstrong Stadium is being utilized to prepare and distribute up to 25,000 packages of meals every day. Each package will consist of two days’ worth of breakfast, lunch and dinner for patients, workers and children.

Levy Restaurants, the food and beverage supplier for the US Open, along with fellow Compass North America operating company Restaurant Associates, are using the stadium’s commissary to fulfill meal packages.

“The city needs to create and distribute in excess of 100,000 meals a day for COVID-19 patients, workers and underprivileged school children who rely on breakfast and lunch in the school system for their nourishment for the day,” says USTA Billie Jean King National Tennis Center COO Danny Zausner. Tractor-trailers are coming from all over the country with the food that the culinary team will box up for distribution.

The University of Louisiana at Lafayette is feeding all campus residents for free, including students who remain in residence halls as well as in the school’s Legacy Park, Cajun Village and the Heritage residences. To-go lunch and dinner meals are served in separate three-hour windows in the Cypress Lake Dining Hall while The Brew in the student union is offering to-go breakfasts Monday through Friday from 9 a.m. - 11 a.m. and regular to-go options from 11 a.m. - 3 p.m.

Boasting a culinary degree from Johnson & Wales University, Staggs brings over 25 years of culinary, K-12 foodservice and leadership to the CEO position. He began his career in fine dining, receiving numerous awards as executive chef at critically acclaimed restaurants in Miami, Houston and Los Angeles, then progressed to serving as a corporate executive chef and as corporate research and development chef for two restaurant chain operators.

The coronavirus outbreak and work-from-home orders that forced tens of thousands of employees away from the subsidized gourmet cafeterias of high-tech Bay Area companies like Airbnb, Dropbox, Facebook, Google, LinkedIn, Pinterest, Square, Twitter and Uber have resulted in the swamping of area meal order and takeout platforms. One result was that Facebook's VPN IP got banned from DoorDash because so many people were trying to order food from home while connected to the corporate network at about the same time that it threatened to crash the system.

This somewhat cheeky article looks at the phenomenon and the ways cooking-skill-challenged techies are coping with securing meals, but also raises interesting questions about the value of onsite corporate dining services. After all, every minute spent wondering where (literally) your next meal is coming from or attempting to make “totwaffles” (don’t ask, read the article if you’re curious…) is one less minute of productivity, an aspect of the working-from-home culture that the coronavirus impact may bring to the fore.

Read more: When Tech Cafeterias Close, the Internet Gets Weird With Food

With March Madness canceled and restaurants across the country closed, the meat industry is overloaded with chicken wings it can't sell. Onsite foodservices still in operation might want to…er, bone up on their chicken wing recipes.

"The wing business is totally in the gutter," said Stan Neva, the owner of the Northwest Meat Co. in Chicago, which supplies meat to restaurants, hotels and clubs. "The only way we're selling wings is for curbside to-go. We have one pizza place in town that does carry-out and ordered some wings. But that's been it. We probably lost 30 or 40 sports bars," Neva said.

"There were a ton of wings for March Madness," a U.S. Department of Agriculture spokesman said. "Suppliers stocked a lot of wings, and since there was no March Madness, they're trying to push them to retail."

But food service providers are set up to process and package wings in large volumes, and they're not always able to repackage them to be retail friendly.

What's more, although retail demand for chicken has spiked, consumers are more interested in breast meat, legs and whole birds.

Bonus: How Florida Blue continues serving meals to the community in Jacksonville during coronavirus