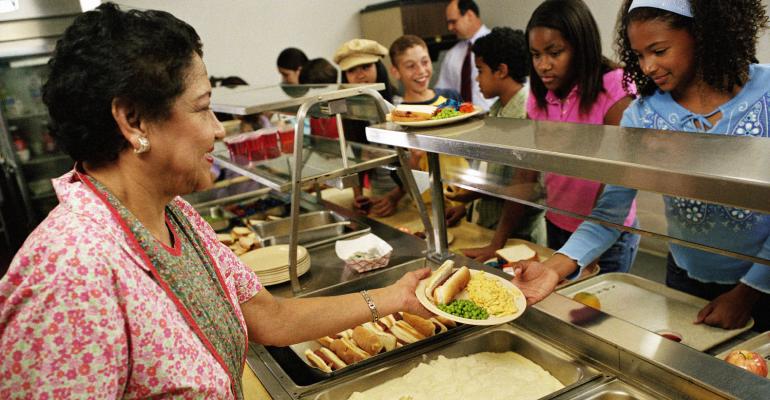 Yellow Dog Productions / The Image Bank / Getty Images
Orange County Public Schools in Florida, one of the largest districts in the country, is looking to hire 150 candidates to work in its cafeterias.
News & Trends

This and Harvard withdrawing dining schedule changes due to union objections are some of the stories you may have missed recently.

Harvard University Dining Services (HUDS) has withdrawn the proposed schedules it sent to its dining services union the previous month after the union alleged it would eliminate 20% of current full-time jobs at the residential houses and 8% of total hours. The schedules were originally designed to accommodate changes HUDS is making to undergraduate dining options, including an expanded weekend brunch and meal time changes, and now that they are voided, HUDS will either maintain hours for current dining services employees or work with the union to create new schedules, the department announced.

A majority investment in FM Top 50 firm Whitsons Culinary Group is being acquired by its management in partnership with private equity firm GenNx360 Capital Partners. Whitsons, which operates school nutrition, residential and healthcare dining, prepared meals and emergency dining services throughout the Northeast, will continue under the management of Paul Whitcomb as CEO and Beth Bunster as CFO, with other members of the Whitcomb family also remaining active in the business.

Prepared meals vendor Revolution Foods has announced its conversion to a Delaware Public Benefit Corporation (PBC) following a $60 million funding round led by investment firm L2 Point and investment funds managed by Morgan Stanley Private Credit. Since its inception in 2006, Revolution Foods has designed, produced and delivered close to 500 million healthy meals to clients such as school districts, charter schools, community and major city feeding programs, childhood education centers, senior programs and afterschool youth programs across 23 states. "The transition to a PBC marks an important milestone in our journey while also aligning with our broader company mission to transform citywide wellness," said CEO/Co-founder Kristin Groos Richmond. "The Board's approval of this critical measure, coupled with L2 Point and Morgan Stanley Private Credit's significant investments, will enable us to strengthen our infrastructure and innovation while we expand into new channels and regional markets."

Starting in October, the 34 cafeterias serving students at 20 universities in Berlin, Germany, will become primarily meat-free with only one meat option offered on four days of the week and Mondays being completely meatless. As a result, the menus will be 68% vegan, 28% vegetarian and only 4% containing meat or fish.