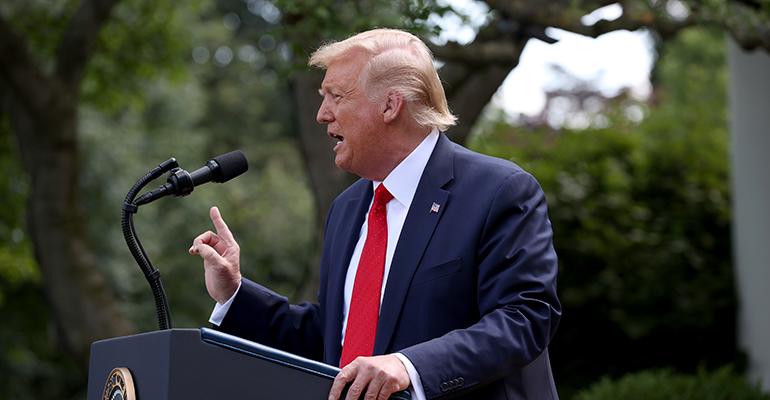 This and an Aramark automated c-store opening in a luxury apartment complex are among the things you missed for the week of July 6.

One of the reasons President Donald Trump lashed out at federal guidelines for reopening schools is because it urges all kids to bring lunch from home, Press Secretary Kayleigh McEnany told reporters.

Related: 5 things: How much will re-opening schools and colleges cost—and who will pay?

"There are 22 million children in this country who depend on these meals, who depend on nutrition in schools," McEnany said, when pressed for an example of why Trump earlier on Thursday warned he'd be meeting with the Centers for Disease Control and Prevention (CDC) officials about the guides they issued.

Trump tweeted earlier in the day that he disagreed with the CDC and "their very tough & expensive guidelines for opening schools."

"While they want them open, they are asking schools to do very impractical things. I will be meeting with them!!!" he wrote.

The CDC proposal McEnany pointed to reads: "Have children bring their own meals as feasible, or serve individually plated meals in classrooms instead of in a communal dining hall or cafeteria, while ensuring the safety of children with food."

Previous guidance from the CDC included a recommendation to provide pre-packaged, grab-and-go meals for students.

Read more: Trump Battles With CDC Over School Lunches As He Urges Schools To Reopen

"In today's environment, QuickEats Close Convenience offers customers a truly autonomous shopping experience that is safe, convenient and contactless, simply by downloading the app and swiping their smart phone," said Gary Crompton, president of Aramark Business Dining. "We are excited to partner with Greenwood & McKenzie in delivering this innovative concept to their tenants and look forward to opening the store to the broader Santa Ana community."

The convenience store features a variety of fresh and specialty items, such as Pressed Juicery juices, coconut water, grab-and-go sandwiches, cheese plates and fruit as well as assorted beverages. In addition, it offers household items like cleaning products, toilet paper, dog food and other goods.

The City University of New York (CUNY) has approved a long-term contract with CulinArt Group to consolidate the operation of dining facilities across the university in a move that the company says promises significant improvements to food services on its campuses after the pandemic. The deal includes provisions for facilities upgrades, support for food-insecure students and assurances of better workplace conditions for food-services staff.

The contract replaces a long-standing system in which food vendors were hired and overseen by the campuses. After a two-year bidding and evaluation process, CUNY and CulinArt have agreed to a multiyear arrangement for management of food services on 18 of the 19 CUNY campuses that have dining facilities.

CulinArt will invest $16 million to upgrade facilities and technology and cover transition expenses, and another $2 million to provide students in need prepaid cards to buy foods at the facilities. The contract also includes a profit-sharing provision that could yield revenue for CUNY colleges.

As food insecurity increases across Chicago as a result of the COVID-19 pandemic and accompanying economic recession, a pantry at the University of Chicago Medical Center (UCMC) has continued operations for hospital patients and staff in the face of mounting demand. Feed1st, as it’s known, was started in 2010, after a chaplain at the medical center’s Comer Children’s Hospital noticed hungry parents at their children’s bedsides.

The pantries, which were located in six different spaces across UCMC prior to the onset of the COVID-19 pandemic, are available to all patients and staff. They are open as often as possible, usually 24 hours a day.

Feed1st was forced at the beginning of lockdown to consolidate and move the location of its pantries, in line with public health protocols. Currently, three pantries are open: one in the children’s hospital, one in the Sky Cafe at the Center for Care and Discovery and one for staff at the Mitchell Hospital. Since fewer people have been allowed in the hospital over the past few months, and Feed1st doesn’t track pantry visitors apart from offering a short, voluntary survey, it’s difficult to know how many more people are using the pantry now.

5. Penn dining workers in the dark about fall plans

Although the University of Pennsylvania (Penn) announced last month that its campus will open to students and faculty in fall 2020, workers for Bon Appetit Management Co., who staff Penn’s retail dining locations and Falk Dining Commons, say they have not yet been informed of the decision after months of silence from their employer.

Penn’s Universitywide June 25 announcement about the fall semester read that on-campus dining halls will operate with a focus on takeout and pre-packaged meals, prohibiting self-serve options such as salad bars. All regular full-time dining staff, both those employed by Penn and those employed by Bon Appétit, are expected to return to campus dining in the fall, Director of Hospitality Services Pam Lampitt wrote in a July 2 emailed statement to The Daily Pennsylvanian.

Bon Appétit employees, however, said they have neither heard from the company since mid-March nor been informed of plans for fall dining operations.