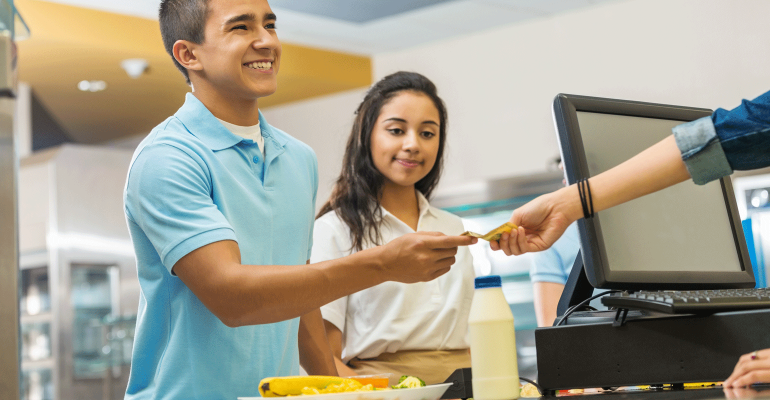 Unpaid meal accounts have long been an issue, but every once in a while it blows up. This time it’s in New Hampshire, where a story unfolded this week regarding Valley Regional High School in Canaan, N.H., where Bonnie Kimball was fired after letting a student go through the lunch line with a meal though he didn’t have money, she says. She added that she told the student to bring the money in the next day, which he did. Kimball says she was fired for theft. A few days later, the district’s foodservice provider, Café Services, offered Kimball her job back. Fast-forward and the district said this wasn’t a one-time incident and that Kimball had in fact allowed the same student to go through the lunch line for the past three months without charging him. Café Services said the specific incident that got Kimball fired had the student receiving a full reimbursable meal and four a la carte items.

And in more unpaid meal debt news, a student in Indiana said she was forced to return her tray of hot food and wait in the back of the lunch line to receive an alternative meal after her meal account didn’t have funds to cover the hot meal. Her grandfather called the move the “cafeteria walk of shame.” This isn’t a new issue or one that is going away any time soon. The School Nutrition Association found that more than 75% of districts had unpaid meal debt at the end of the 2016-17 school year.

Read more: School Made Six-year-old Girl Do 'Cafeteria Walk Of Shame,' Return Lunch, Because She Didn't Have Enough Money

And one more item regarding unpaid meal debt: The Minnesota attorney general has said that districts cannot prevent students from graduating if they have unpaid debts in their meal accounts. Many districts use the threat of withholding a diploma until students pay their debts, including cafeteria and library fees. "Minnesota law supports the principle that living with the dignity and respect that comes from participating in a graduation ceremony cannot be restricted by your ability to afford your life," Attorney General Keith Ellison wrote in a binding legal opinion.

There’s been a lot of news lately about food insecurity among college students. College dining programs are offering services like food pantries and swipe donations to help assist with the issue. UC San Diego is now using an app to alert students when leftover food from social events is available. More than 700 students have signed up to receive the notifications.

Some colleges are reporting a shortfall in enrollment numbers, particularly in the Northeast and mid-Atlantic. Ithaca College, which enrolls around 5,500 undergraduates, expects that it will have 175 fewer freshmen—which equates to $4.6 million less in tuition revenue than planned. And it’s not just tuition that will take a hit. With fewer students, dining services will have a smaller pool from which to get students on meal plans.