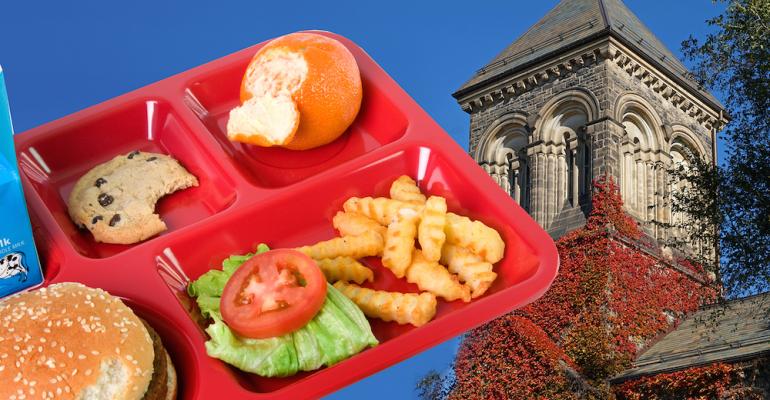 5 things: Should the National School Lunch Program expand to colleges?

This and more are the things you missed for the week of April 25.

1. Should the National School Lunch Program expand to colleges?
For some advocates, the answer is yes. The Wisconsin Hope Lab, a policy and research organization that focuses on issues confronting low-income college students, developed a proposal that would expand the federal childhood feeding program into colleges. The expansion would cost an estimated $4 billion annually and impact about 7 million students who receive Pell grants. The Wisconsin Hope Lab didn’t offer suggestions on making the expansion a reality, but merely suggested the idea, saying helping low-income students with their food needs would “likely improve college attainment and reduce future dependency on the social safety net.” The Lab found that 61 percent of college students experienced food insecurity at some point during the academic year. Not everyone was on board, however, with some saying expanding the National School Lunch Program to college students would “certainly lead to a great deal of waste and fraud,” according to Diverse Education.

2. Childhood obesity rates still climbing
It’s probably not all that surprising but childhood obesity rates continue to climb, despite some cities reporting a drop in the rates. Those cities are seeing the decline in the youngest of children (those in preschool), while the entire childhood population—those between the ages of two and 19—continues to see the same upward trend that started in 1999, according to a new study out of Duke. The researchers found that rates for overweight and obesity in the past 15 years have steadily increased. The increase from 2013 to 2014, the most current data, found that 33 percent of children were overweight and 26 percent were obese. During the past 15 years, the overweight children went up from 28.8 percent to 33.4 percent, and obesity increased from 14.6 percent to 17.4 percent.

3. College uses Mason jars to boasts sustainability efforts
Many colleges are turning to reusable mugs to help cut down on the amount of packaging waste coming from beverages. But Humboldt State University in Arcata, Calif., is using something a little more unique and hip: Mason jars. The jars will be used to serve both hot and cold beverages. For example, a coffee costs $1.50 if you bring your own container. A Mason jar will be available for purchase for 75 cents or paper cups for $1. Plastic cups for cold beverages will also be available for $1.

4. 5 menu trends driven by millennials
Millennials are the it generation right now. They’re big, and they are spending money. So what exactly do they want? That’s what everyone is trying to figure out. In a new report, Packaged Facts notes, “This pronounced proclivity for bold and confident individualism extends noticeably to millennials’ food choices.” Restaurant Hospitality notes five trends being driven by millennials, including customization, snacks and bowls.

5.  Student develops school lunch ordering app
We’ve seen a lot of students developing apps to help enhance the dining experiences, but those are mostly on college campuses. Some Indians high school students have joined the ranks by created apps that help students bypass the lunch lines. The apps work for two different locations on campus and allow students to preorder their food items. The locations have separate pickup locations for those ordering through the app. While the numbers of orders placed through the app is still very low—about five order per day—the district’s foodservice department is embracing technology in a way most often seen with college dining services.

UMD to offer free beverages with use of reusable cup
Sep 02, 2015