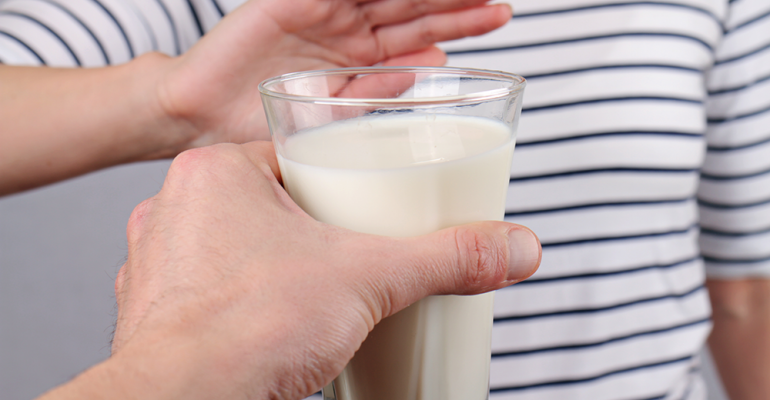 ChesiireCat/iStock/Getty Images Plus
The student maintains that UK has failed to provide adequate accommodations for her to avoid dairy in her diet.
News & Trends

This and the FDA approving the first peanut allergy drug indicated for children are among the things you missed for the week of February 3.

A 20-year-old student identified only as “Jane” in court documents is taking legal action against the University of Kentucky (UK), charging that she has been discriminated against because of her severe allergy to dairy. The student, a National Merit Scholar who had received a full scholarship in November 2018, alleges that UK gave assurances that her need to completely avoid dairy in her diet could be met but has failed to provide adequate accommodations to allow her to attend and eat safely.

In her lawsuit, Jane contends she has faced discrimination based on disability under the Americans With Disabilities Act (ADA). She further claims the college has violated Section 504 of the Rehabilitation Act, which requires publicly funded educational institutions to allow students with disability to participate in the same fashion as other students.

The university counters that the accommodations it proposed to Jane do comply with the law.

More than 30,000 pounds of food went unused at Miami’s Hard Rock Stadium after Super Bowl LIV, but it didn’t go to waste as volunteers with Food Rescue US in partnership with Hard Rock concessions operator Centerplate and NFL Green rescued that food, packed it up and shipped it to five area shelters in need. The food collected included beef tenderloins, barbecue chicken, wings, ribs and charcuterie plates from VIP catered sections, concession stands and suites, among other places.

The U.S. Food and Drug Administration has approved Palforzia—Peanut [Arachis hypogaea] Allergen Powder-dnfp—to alleviate allergic reactions to accidental peanut exposure that is indicated for initiation in individuals aged 4 to 17 years old with a confirmed peanut allergy.

"When used in conjunction with peanut avoidance, Palforzia provides an FDA-approved treatment option to help reduce the risk of these allergic reactions in children with peanut allergy," Peter Marks, director of the FDA Center for Biologics Evaluation and Research, said in an agency news release.

The FDA notes that Palforzia cannot be used for emergency treatment of allergic reactions. Treatment involves three phases, including initial dose escalation, given on a single day; up-dosing, which involves 11 increasing dose levels over several months; and maintenance.

The Elevate Meal Program designed to offer students at universities in or near the Oakland neighborhood of Pittsburgh meal swipes and discounts at 16 local restaurants has failed to impress those restaurants a month after the program’s January 2020 launch as sales have lagged. The Oakland area includes the University of Pittsburgh and Carnegie-Mellon University.

Elevate, which launched at the University of Virginia in 2016 and now operates at 10 campuses, lets users purchase semester meal plans ranging from a five-meal “starter pack” for about $33 to 105 meals—7 per week—for $1,112.

The difficulty in Pittsburgh apparently involves timing as a January launch caught students after they had already chosen meal plans offered by their schools at the start of the academic year. Also, Pitt students living in on-campus dorms are required to purchase the university’s residential meal plan, effectively removing them from considering the Elevate option.

Citigroup Inc. has suspended a junk-bond trader in London for repeatedly failing to pay for food taken from the bank’s cafeteria. The culprit, Paras Shah, is head of Citigroup’s high-yield bond trading for Europe, the Middle East and Africa, and had earned about $1.32 million annually, including a bonus. He didn’t respond to a request from the Wall Street Journal for comment.