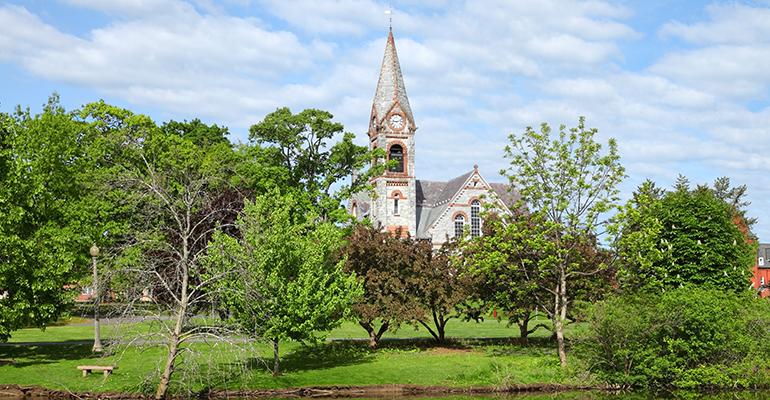 DenisTangneyJr / iStock / Getty Images Plus
UMass sues contractors for failed ductwork at renovated dining facility plus four other things you may have missed this week.
News & Trends

This and Sodexo’s acquisition of a British meal production/delivery firm are among the things you missed for the week of November 30.

The University of Massachusetts and the UMass Building Authority are suing eight contractors, seeking at least $2.86 million for their alleged role in the collapse of ductwork in kitchen exhaust systems at the Blue Wall Dining Hall at the Lincoln Campus Center on the Amherst campus. The nine-count complaint charges that less than four years after completion of the renovation project, the collapsed ductwork caused operations to be limited for several months at the Blue Wall.

Sodexo has acquired British firm Fooditude, which produces high quality fresh food from a 20,000 square foot central production kitchen in London that it then delivers to corporate clients, primarily high-tech media and technology firms such as Netflix and Pinterest. The move is expected to accelerate Sodexo’s rollout of delivery models such as Good Eating Company Delivered, which it launched in August.

Auburn University expects to debut its new $26 million Central Dining Hall next April, adding new options to the campus dining environment. The three-level facility will include a Starbucks, a c-store, nine food stations and three board rooms with glass windows overlooking Jordan-Hare Stadium. The food stations include a pasta station, a pizza station, salad bar, “comfort food” station and an allergen-free station.

While the coronavirus pandemic has forced school meal programs to develop and deploy hybrid feeding models such as curbside pickup and even delivery using school and municipal buses, meal counts have generally lagged significantly behind counts distributed during normal times. Nevertheless, the new models have forced meal programs to incur increased costs in areas such as grab-and-go meal packaging, personal protective equipment for staff and even fuel for the delivery buses.

In an encouraging piece of news for corporate dining service providers, a recent survey of 2,033 office workers worldwide by the commercial real estate firm JLL found that three out of four hope to return to an office at some point in the future, with roughly one-quarter hoping to return to the office full-time after the health risks of the coronavirus subside. Nearly half said they hope their office will prioritize socialization spaces such as coffee areas, lounges or terraces, a response in line with predictions that in the post-pandemic world, workers will choose to use their remote-work days for solo focused work while time in the office is dedicated to teamwork, collaboration and companywide networking events.

Read more: 3 in 4 workers want to return to an office in the future—here’s how they expect the workplace to change