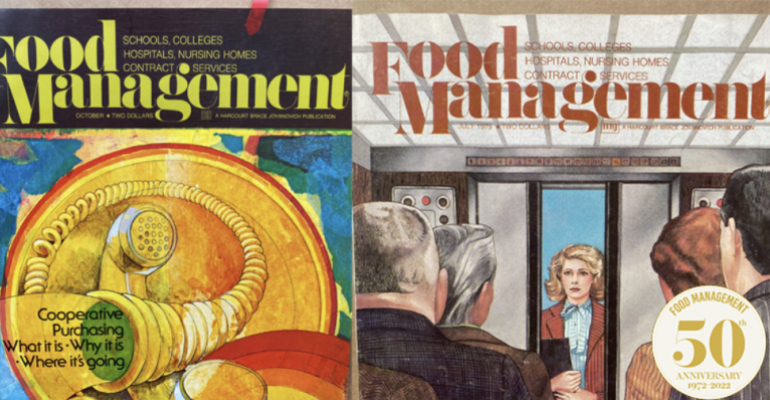 Start Slideshow ›
Starting with its inaugural issue in August/September 1972, Food Management in the 1970s produced reports on enduring issues like nutrition science/education, the role of computers and the perennial contract vs. self-op debate…

When Food Management magazine launched the early fall of 1972, the world was a different place. Computers were still more science fiction than everyday fact, business was dominated by men outside of a few “feminine” professions like nursing and dietetics, and nutrition wasn’t so much a science as a matter of folk wisdom.

In the “institutional” or “non-commercial” foodservice world, the dominant operating model was the steamtable serving line and self-operation with scratch cooking of standard dishes was the norm, though contract firms were making inroads and centralized production’s advantages were started to be realized, along with its expense.

From the beginning, FM focused in on the issues of critical importance to the market and along the way launched a 20-year tradition that brought together the heads of the major non-commercial foodservice professional associations to discuss areas of mutual interest, highlighting the magazine’s mission to cross-pollinate best practices and innovations across the various onsite dining markets.

Here are 10 prominent FM cover stories from the 1970s…