ADVERTISEMENT
The Dramatic Age of Nutrition

FM’s first issue featured a cover story discussing the then-emerging modern view of nutrition science that was then slowly evolving from long-held verities about simply eating three squares a day that incorporated the “four food groups”, to more complicated views that continue to be a source of contention and debate today.

This was still the age of mainframes in enclosed, air-conditioned data processing labs fed with keypunched cards and tape using arcane languages like FORTRAN, but FM was looking ahead to an increasingly technological future. “It may not be for your foodservice today or tomorrow,” wrote Editor William Patterson. “But in time, directly or indirectly, it is likely that all foodservice directors and dietitians will be using the services of computerized food management.”

The race for a slice of that $4 billion—the estimated size of the market available to contract management firms at the time—was among some 6,100 companies according to this report, though then like now the industry was dominated by a few “giants” (relatively speaking) like ARA, Canteen, Saga and Interstate United, who were aggressively competing on price to build market share and buying up smaller competitors.

Cooperative Purchasing: What It Is, Why It Is & Where It’s Going

In the midst of the mid-70s economic slump, cooperative purchasing started to become more attractive to an institutional foodservice market that at the time was composed mostly of stand-alone independents who were used to making their own procurement decisions. Their concern: how much would they have to give up and would the cost savings justify it?

Does School Breakfast Have a Future?

Ten years after the birth of the School Breakfast Program, only 10% of students eating school lunch were also eating school breakfast. Why? This FM analysis found the answer at the time to lie among a combination of inadequate funding, red tape hassles, overworked staff and a lack of parental interest combined with a general feeling that breakfast is the family’s responsibility, not the school’s. Some things have changed, but even today, school breakfast sees a much smaller participation rate than lunch, especially among older students.

At a time when central kitchens were still a fairly new concept (only a couple had been around for more than a few years), FM explored the benefits (“incredible meal production capability and a high meal-per-man-hour ratio”) and the downsides (raw dollar cost of building one) for school districts. Included was a list of the 23 largest school district “super kitchens” operating at the time, topped by the one serving 117 Philadelphia Public Schools sites with 42,000 meals a day, less than half its 90,000 meal/day capacity. A sidebar explored a similar trend in the healthcare market, where issues like special diets and the need to produce 3+ meals a day for patients limited centralized volume production operations.

The 1977 President’s Conference on Nutrition

In 1977, FM sponsored an event that for the first time ever brought together the presidents of the four then-largest and most influential professional associations in the institutional foodservice world—the American Dietetics Association (ADA, now known as the Academy of Nutrition & Dietetics), the American School Food Service Association (ASFSA, now known as the School Nutrition Association or SNA), the American Society for Healthcare Foodservice Administrators (ASHFSA, now part of the Association for Healthcare Foodservice or AHF) and NACUFS (National Association of College & University Food Services), which continues to represent the higher education foodservice community to this day. Inauspiciously held in New York City just a day after the great blackout of July 13-14, 1977, it addressed the possibilities of establishing a unified approach to nutrition education and the merits of a national nutrition policy and was so successful that the presidents asked FM to sponsor a similar get-together the following year, starting an annual tradition that partied until 1999.

Tearing Up the Market: Contract vs. Independent

Eight years after Congress opened the doors to allow private firms to operate federally funded public school meal programs, the House of Delegates at the 31st Annual School Foodservice Association Convention in Houston voted almost unanimously to bar employees of contract firms from membership, escalating what is still a major source of contention in the school nutrition market. Nevertheless, while contractors have made market share inroads, most K-12 public districts remain self-operated to this day.

The Future of Vending

This story explored recent innovations to improve the image of “the black sheep of foodservice” through what at the time were “breakthroughs in technology” that made vending healthy snacks and even complete meals possible. Some programs even tried onsite hostesses to add a human touch to the impersonality of “machine cuisine,” a labor-intensive solution that was still plausible then. Innovations at the time included a machine that could dispense appetizers, sides, entrees and desserts in one machine, though it came with a then-prohibitive price tag of $5,500, and another one that dispensed customized hot beverages thanks to “micro-computerized controls.”

Going Up: the Shocks and Challenges of a Woman in a Man’s World

This lengthy contributed piece from Janet Andrews RD discussed the status of women in the foodservice industry workplace, where they mainly filled roles in areas like dietetics Though she doesn’t name her company (probably American Hospital Supply Corp., acquired by Baxter in the mid-80s), she does talk about the challenges she overcame in rising to general manager in charge of sales, a highly unusual role for a woman at the time. Among the lessons she passes on is the need for women starting in dietetics to add management skills if they want to advance to leadership positions. 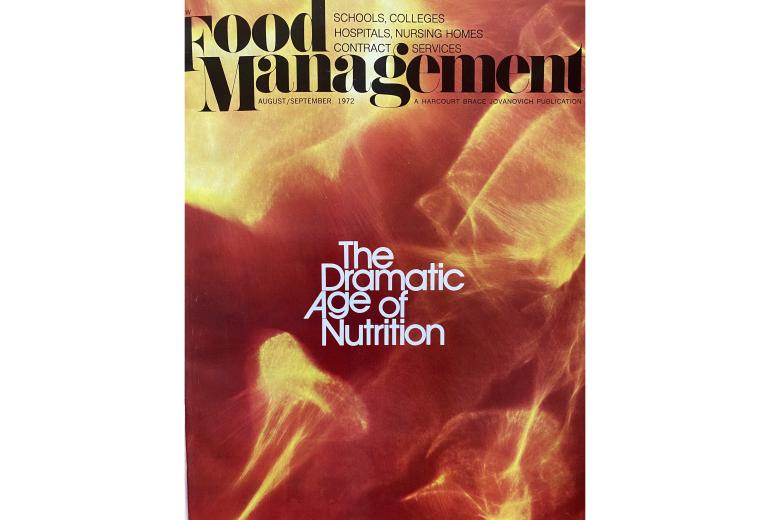