Serving as the magazine’s 10th anniversary issue, complete with a near-reprise of the first issue cover, this editorial package looked back at advances made by the onsite foodservice industry in the previous decade and those to come in the next. Among the emerging trends were the growing realization of how diet is a key factor in health, along with a growing commercialization of what was previously a staunchly non-profit community. “We stand now on the threshold of the next decade in the dramatic age of nutrition,” the editors wrote in the package introduction. “But isn’t it amazing that we can walk on the moon, we can travel through space, we have access to technology that sustains life…and yet, we don’t yet know what optimal nutrition is.” Nearly 40 years later, that question still remains open…

The For Profit Revolution

In the mid-80s, FM examined the growing phenomenon of for-profit healthcare and its implications for in-house foodservice. Among the impacts was an expansion of nutrition department responsibilities as the for-profit chains “looked for potential markets in peripheral healthcare areas. Foodservice directors and dietitians began to run diet centers, provide nutrition counseling for diabetic, alcoholic and cancer patients, sign contracts with daycare and senior citizen programs for meal delivery and take on Meals-on-Wheels programs,” wrote FM Contributing Editor Karolyn Schuster. A similar story was taking place in eldercare. “The independent, free-standing nursing home is expected (by industry observers) to become as rare as an independent free-standing hospital in the coming years, as the nursing home industry tries to control costs with the same economies of scale that have forced hospitals to merge,” Schuster wrote.

Though “sports nutrition” wasn’t yet a thing in the mid-80s, when this feature package came out, it did note that “fueling fitness” was an emerging niche in the onsite dining world, presenting profiles of dining programs at an Olympic field hockey tryout camp at Smith College, summer sports camps  at the University of Oregon, the National Sports Festival in Baton Rouge and, perhaps most significantly, at office furniture firm Steelcase, which was embarking on an early version of a corporate wellness program featuring fitness classes and healthful meal options for its 7,500 employees, with the goal of promoting employee satisfaction and controlling medical insurance costs.

The “farm crisis” of the mid-80s prompted a series of high-profile movies (Places in the Heart, The River, etc.), the annual Farm Aid concerts to raise money for debt-crushed family farms and a lot of hand wringing in Washington and among pundits about the “plight of the family farmer,” farm price supports, factory farming and the impact of agricultural policy on the health of the nation’s citizens. “Chronic diseases are the principal cause of illness and death in the U.S. [and] diet plays a significant and perhaps even dominant role in the development of chronic illness, and food policy will increasingly reflect this relationship,” the article predicted. One result: national dietary guidelines, introduced five years earlier, looked to be taking hold, and there was a growing call for federally imposed nutrition labeling.

In Pursuit of Wellness

Wellness was catching on in America by the mid-80s, with more individuals discovering the benefits of eating healthy diets and getting more exercise, and that led to a growth in institutional and corporate wellness programs supporting those goals. However, organizations and their foodservice departments were challenged with issues such as the cost/benefit ratio of these programs and how comprehensive they should be—for instance, should cafeterias serve both healthful and less healthful but popular dishes, or just healthful options? “Quite simply, few institutional or company managers are going to invest much money in wellness programs unless they think there will be a positive effect on their bottom lines” in terms of productivity increases, healthcare cost/insurance rate reductions and competitive advantage, the article noted. Has much changed since then? Probably not…

What’s Ahead for an Industry in Transition?

Ten years before the debut of the FM Top 50, the state of the contract management sector was explored in this report, published at a time when the industry was rapidly consolidating around a few giant companies surrounded by much smaller niche players (sound familiar?). FM secured input from top executives at five major firms—Marriott Foodservice Management, ARASERVE, Canteen Corp., Service America Corp. and Greyhound Food Management—who talked about their advantages in terms of systems and economies of scale. Of those five, however, only ARASERVE, now known as Aramark, still operates as an independent firm while Canteen continues under that name, but as one of the operating companies of Compass Group North America. An adjunct piece gave the smaller players’ side, which dealt mainly with nimbleness, flexibility and closeness to customers. Tellingly, none of these firms still exists today as an independent company.

The Future: Getting Ready for the 21st Century

This deep dive into what the coming years and decades may be like drew contributions from futurists, marketers, scientists, researchers and equipment designers. Some were remarkably on the money: “we are on the threshold of a new age in which electronic wizardry will alter our lives,” wrote New York University Dean Herbert London, citing “telephones with video capability” as one example (hello FaceTime!). He also predicted the rise of remote work, thanks to the personal computer and its ability to access information from anywhere (or at least anywhere a dial-up connection was available…), though the full blossoming of the internet through the World Wide Web was still at least five years away. In a section called “Tooling Up for Tomorrow: A Foodservice Buyer’s Guide for the 21st Century,” FM editors predicted the availability of such things as hospital patient meal ordering through voice-activated computers, burger patty-making robots, controlled atmosphere packaging, gourmet vended meals, high-energy snack bars and packaged veggie snacks.

“Is the independent foodservice director employed directly by a single institution a dying breed? Is the self-operated foodservice department an endangered species?” asked the opening paragraph of this piece. Outsourcing was on a major roll when this article came out, driven by a growing commercialization of what had traditionally been “non-commercial.” “The previous emphasis on providing community service first and worrying about how to pay for it later has pretty much been left in history’s dust as institutions have evolved to become more competitive, more cost-effective, more market-driven and more ‘profitable’,” wrote FM Editor Karolyn Schuster. However, even in the midst of the gloom and doom, voices of caution remained, citing success stories like UC-San Diego (whose FSD, Larry Barrett was pictured on the cover), Missouri Hospital and Bryn Mawr College as potential models for future self-op success.

Bitter Pill to Swallow: The Poisoning of the Earth…and What’s Being Done About It

Sustainability is hardly a new idea (the first Earth Day was back in 1970, for example), as by the end of the 80s, when this piece came out, garbage-strewn beaches, acid rain, agricultural runoff, ozone depletion and a host of other environmental ills had caught the attention of individuals, organizations and governments. In the onsite foodservice community, emerging efforts to save the planet included recycling, promoting reusable beverage cups and permanent ware plates, banning nonbiodegradable packaging materials and switching disposables from polystyrene to paper, though some questioned the net benefit of that move. 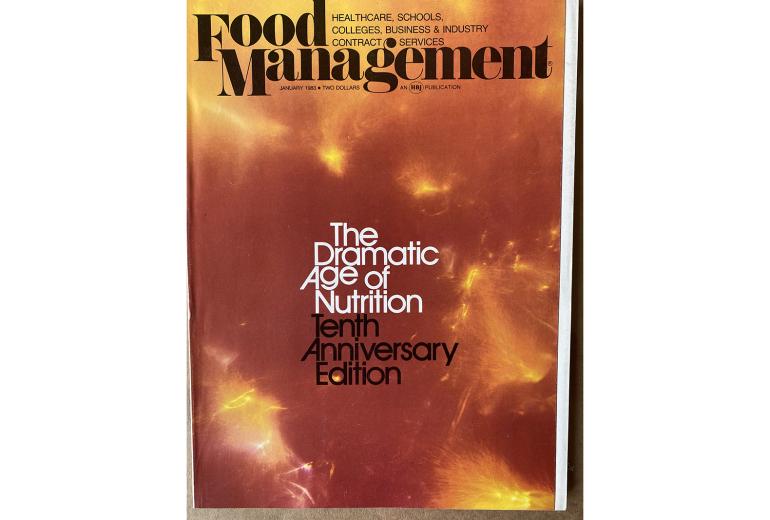