ADVERTISEMENT
The Best of Both Worlds

The commercialization of “noncommercial” foodservice was driven in large part by contract companies that introduced products, merchandising techniques and operating systems first developed by the commercial foodservice facilities and divisions their parent companies owned or managed, and this story explored some prominent examples from firms like Restaurant Associates, Morrison Hospitality Group, Marriott Management Services, Gardner Merchant Food Services and ARASERVE. What jumps out is how prevalent contract companies’ commercial operations were at the time, something less common today, at least as outright separate business lines.

The phenomenon of foodservice directors taking on responsibilities in other support service areas like housekeeping, maintenance, facilities and even security was explored through a series of profiles of directors experiencing this “mission creep.” The consensus: on the one hand, increased responsibility means more clout and better prospects for career advancement, but on the other hand, the specialized expertise that managing dining programs require can get watered down or get less attention as oversight is spread over more unrelated areas.

Foodservice began to seep out of its traditional home in the cafeteria by the mid-90s, prominently through mobile or stationary carts in a phenomenon that came to be known as “intercept marketing.” The idea was that if some customers won’t come to you, you can go to them at places where they can be “intercepted” for additional sales. The carts generally served limited menus of popular items, operated only at peak periods and required minimal staffing.

The Non-commercial Operator as Brand Manager

One inevitable result of the growing commercialization of onsite foodservice over the 1980s and 90s was the growing importance of branding. Traditionally, onsite resisted branding, preferring to be identified with its host organization, but as the demonstrated power of brands over consumers became undeniable and commercialization pressures mounted, onsite dining programs began taking a second look at either developing their own branded concepts or even branding their departments with a defined identity. In this issue, FM offered an exhaustive tutorial on developing and executing a branding strategy.

The New Customer: Are You Delivering What She’s Demanding?

The decline of meal subsidies in the 1990s came with a side dish of raised customer expectations—after all, if they were paying more, diners wanted their money’s worth, and that meant giving them what they wanted, which apparently was “food that looks good, tastes as good as it looks, is nutritionally sound, and is served with a smile in pleasant surroundings,” per the intro to this story. It looked at operations across markets that got it in terms of satisfying the new realities, such as the University of Notre Dame, the University of Pennsylvania, Motorola and Methodist Hospitals of Memphis.

Can School Programs Cut the Fat and Keep Their Customers?

Almost 20 years before the Healthy Hunger Free Kids Act hit school nutrition programs, those programs were already facing challenges brought on by federal requirements to have school menus conform to the then-latest edition of the Dietary Guidelines for Americans, which required a significant reduction in fat content. The worry was that cutting down the fat would also slash participation among kids used to greasy fries and cheesy pizza. Also at issue was documenting compliance, as nutritional analysis of menus was still a somewhat complex process and the software then available for the task come with a daunting learning curve.

Though “growth in the vended foods market has been flat to marginal in recent years,” per the article intro, the industry was optimistic for the future given new technologies expanding the range and quality of choices and even promising remote monitoring of stock levels and unit functioning. The market had been filtering into smaller locations, especially schools, despite federal restrictions on what can be offered (no candy, gum or sodas), and into sites like company offices, healthcare facilities and campuses that had become less centralized and where “vending provides a much-needed, time-saving convenience when trekking to a main cafeteria would take too long,” the article noted.

For its 25th anniversary, FM complied a special package tracing the history of onsite foodservices in the key markets of colleges, schools, businesses, healthcare, corrections, the military, transportation, recreation and contract services. Replete with historic photos, each section traced how the market basically “evolved into the retail-oriented, brand-sensitive operations that dominate the industry today,” Chief Editor John Lawn noted in his opening editorial.

The annual FM Top 50 Contract Management Companies listing debuted in this issue as FM looked to keep up with changes in a rapidly evolving contractor world that was in the process of solidifying into the form it has today, with a “Big Three” of Compass Group, Sodexo and Aramark at the top commanding volume and market share far in excess of the other 47. The inaugural Top 50 captured the moment at which Sodexho USA (then #6) and Marriott Management Services (then #1) had yet to formally merge, though their joint venture—to be called Sodexho Marriott Services—had already been announced. Sodexho would go on to absorb Marriott a few years later, drop the “h” from its name and become the Sodexo that was #2 on the most recent Top 50.

This article looked into how hospitality schools viewed onsite foodservice versus commercial alternatives. Conducting exclusive research in partnership with the Society for Foodservice Management (now the Society for Hospitality & Foodservice Management or SHFM), FM had reported two months earlier on how its survey of commercial foodservice managers found pervasive stereotypes in their attitudes toward the onsite foodservice, seeing it as rote and unchallenging. In this follow-up, FM looked into some of the roots of those prejudices in how hospitality schools approached onsite career options. “The portrait that emerges from examining the survey results is of a hospitality education establishment lacking enough exposure to onsite foodservice to convey adequately the benefits of working in this branch of the field,” the article noted. “Generally, educators’ perceptions show a clear tendency to see onsite as a subordinate opportunity, and these perceptions undoubtedly color classroom treatment of career choices.” While this seems to be less of an issue today, there’s little doubt that commercial remains the “glamour” side of foodservice, something perhaps exacerbated by food and cooking shows that predominantly feature celebrity chefs drawn almost exclusively from the commercial world. 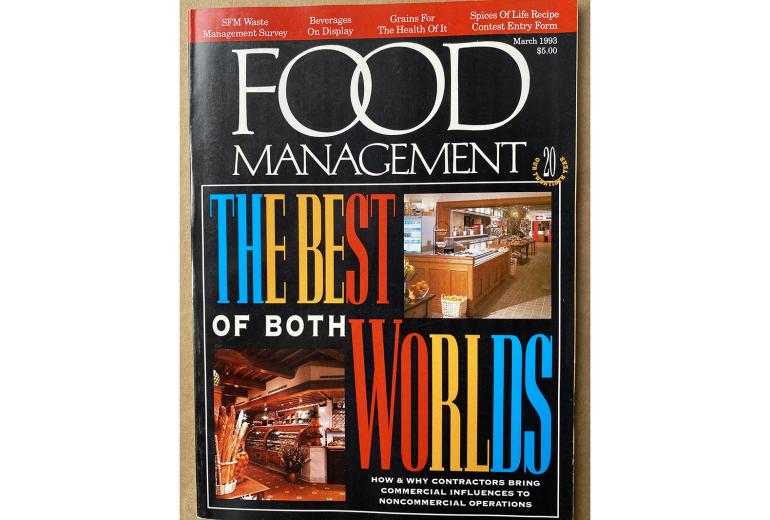