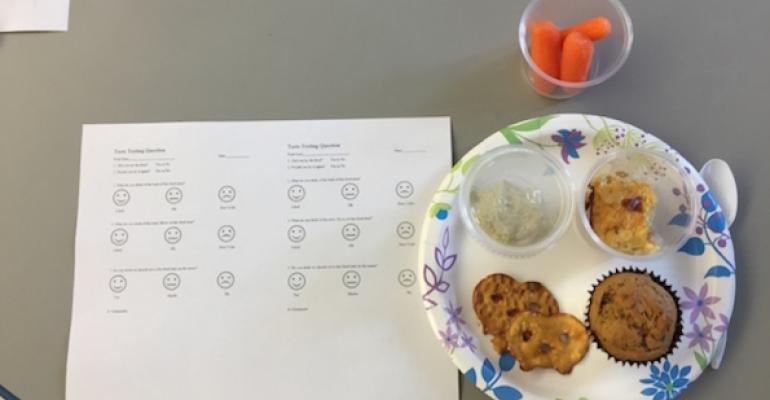 Kansas State University and the Army are working together to standardize and improve the healthiness of food offerings across Child, Youth and School Services menus Armywide.

The U.S. Army Child, Youth and Schools (CYS) Services is on a mission to completely overhaul its foodservice program, which feeds more than 70,000 children breakfast, lunch and snacks each day Armywide.

“We’ve collected best practices from across of our 72 garrisons and we’re developing a research-based comprehensive program with Kansas State University (K State) that will provide healthy menus and programs for all of the kids in our care,” says Cherri Verschraegen, chief of CYS, who led a similar albeit smaller initiative across the Army’s 15 European garrisons before being promoted to her current post in October 2014. “The impact of this initiative will be substantial.”

In civilian terms, CYS is basically workforce support. It offers programs and services for soldiers such as childcare as well as before- and after-school programs. Its foodservice operation serves two main purposes. The first is meals and snacks appropriate to the time of day the child is being cared for. The second is as enrichment tools to further develop life skills for older children through cooking classes, clubs and even gardens.

“Many of our soldiers are on call 24/7,” Verschraegen says. “[These programs are] critical to their success and focus to know that their child is well cared for.”

Up to this point, there was no Armywide menu standard for CYS. Many of the garrisons have a dietitian on base, but without some level of standardization, there has been very little menu consistency base to base.

Come 2017, and thanks to the unique partnership with K State’s child nutrition department, that will change completely.

“We are focusing on menu standardization, more healthful choices and in making sure we give the Army the best value for their dollar,” says Verschraegen, who has been working closely with researchers like Jennifer Hanson, Ph.D., assistant professor and director of the didactic program in dietetics for K State’s department of food, nutrition, dietetics and health, to create menus that meet or exceed the USDA standards, taste delicious and streamline costs. “We started with pilots in two garrisons earlier this year. In the fall, we’ll roll out the full menus to two more garrisons to work out the kinks. Then in February, we’ll go full scale to all of our garrisons Armywide.”

As part of the pilot, K State introduced potential recipes to Fort Leavenworth and Fort Riley, both in Kansas. The staff prepared the dishes on site with Army staff and invited families and children to taste test.

“Our parents are excited about this project,” says Carol Hoffman, CYS coordinator at Fort Leavenworth. “They got to taste foods they’ve never had before like a quinoa carrot muffin, broccoli salad, hummus and cheesy rice casserole. The kids loved the new dishes—and so did the parents.”

After the pilot, K State evaluated the feedback and made adjustments as necessary.

In addition to more straightforward menu descriptions, properly equipping each kitchen for scratch cooking as well as staff training will be two of the biggest hurdles the Army will have to overcome in order to effectively roll out the menus globally.

“Our success hinges on our staff understanding why we’re doing this and modeling good behaviors for our kids and families,” says Verschraegen, who also led the assessment of each garrison kitchen to make sure they are fully equipped for new menus.

This summer CYS will host a mass training at K State for 400 cooks and directors.

“As we shift to scratch cooking, safety becomes a greater concern, so the need to train is high,” Hanson says. “During the training, we will focus on nutrition, portion control and food safety.”

The one-time training program will then get folded into CYS’s program and ongoing onsite training will continue with other cooks and caregivers.

“We will be doing a training in Europe as well as one in Korea to train cooks in both Korea and Japan,” Verschraegen adds.

Once the training has been completed, and the kinks have been ironed out in the four garrisons who will launch the new menus, all 72 army garrisons will have a set of standardized menus complete with nutrition, recipe and ordering calculators. The menus will run in eight-week cycles and are geared toward warm months, cold months and temperate climates.

“We won’t stop there, though,” Verschraegen adds. “We plan to incorporate these recipes into our life skills classes and teach our older kids how to prepare these dishes so they can take these same skills home with them and expose their families to healthful foods and recipes.”

Verschraegen sees the program even further evolving into the Army’s sports and fitness programming as well as into other services including the Navy, Air Force and Marines.

“We could serve healthy food and do nothing else and it would help,” she says. “But our kids go home and make choices for themselves and their families. This initiative will be far-reaching and impactful for all of our service families. We’re building it to be sustainable. We’ve considered every detail and we’re excited about its future.”