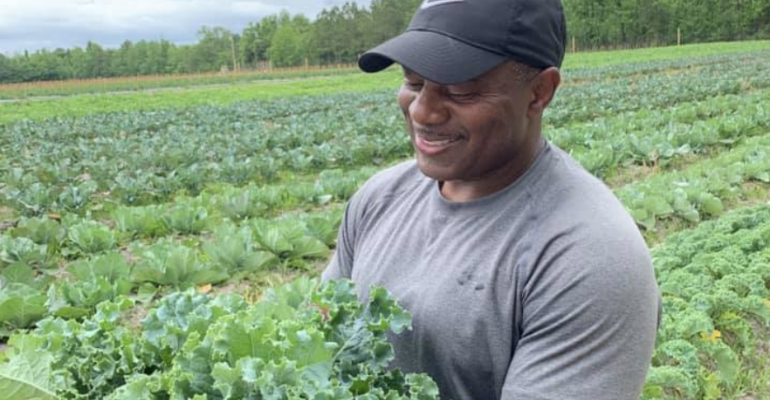 During the lockdown phase of the pandemic last year, Sodexo Live! Executive Chef Phil Evans of the Raleigh Convention Center had too much time on his hands—events were canceled, and he was left alone in the kitchen with his thoughts, for the most part.

Events of 2020 weighed heavy on his mind, especially Black Lives Matter. Pairing that with his already constant train of thought to “do more farm to table,” Evans says. “We were always just so busy [before the pandemic], but in 2020, we had a lot of time on our hands…I was here by myself and decided to take a further look into farm-to-table.” 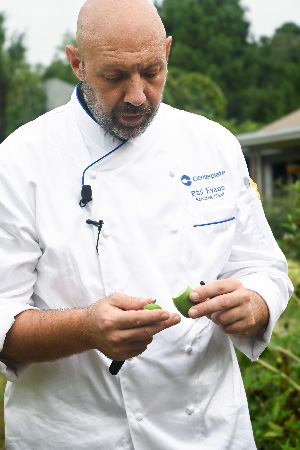 Soon the chef started taking road trips to BIPOC- and women-owned farms in the state of North Carolina, from urban farm patches in Raleigh to sprawling generations-old family farms down winding roads. “I drove all around and went to farms and talked about life and products and building relationships,” Evans says. Put simply, he embraced the philosophy: “I learn from everyone every day.”

Just prior to this, in 2019, Donald Hines was traveling down his own new path in life, going from an FBI agent to a farmer. Hines Family Farm is a place his generation and the one before them had grown away from.

“It’s been our family land for generations,” Hines says. “My great granddad died a lot of years ago, and in his passing, we did not divide up the land. Over the years, almost everyone in the family went out into the world and went on with their careers, but everyone came together at tobacco season. We shared the harvest and we shared the work on the farm. I was drawn back to my family and to the farming culture and that sustainability. It’s what I wanted to do when I retired.”

Soon, he was researching many different crops to plant, and started with 400 peach trees—which seems like a lot! “I don’t dream small. I’m a big dreamer,” Hines says.

Tami Purdue held her own for years in a traditionally male-dominated workplace: a law firm. “I was working 60 to 70 hours a week, and I wanted to move on,” she says. Ironically, now she still does work that much, but loves every minute. 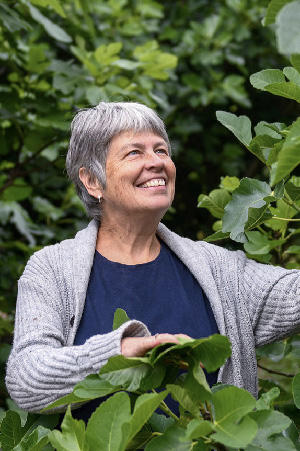 Now, she oversees Sweet Peas Urban Garden, a 1.5-acre plot near N.C. State in Raleigh. After seeing urban farm guru and author of The Good Food Revolution: Growing Healthy Food, People and Communities Will Allen speak, she knew urban farming was her path.

Sweet Peas was Evans’ first visit. From a chef’s perspective, he found the site to be alive with culinary inspiration: Edible flowers, Sungold tomatoes, passion fruit, microgreens and arugula in all its spiky, peppery glory.

Taking it to the table

Evans’ part in this journey is to put it all together on a plate—using produce from these farms for the needs of the convention center. That arugula from Sweet Peas Urban Garden was a total salad standout at an event for Wake County officials. Other growers and food producers included in the program: Roderick McMillan of MG3 Farms, Stanley Hughes of Pine Knot Farms, Sue Hunter of Paradox Farms Creamery, Derrick and Paige Johnson of Grass Grazed Farms, Peggy Rose of Peggy Rose’s Pepper Jellies and Millard and Connie Locklear of New Ground Farms.

Incorporating produce from small urban gardens to larger farms takes some finessing and planning for the unexpected, especially for a convention center that serves guests in the thousands.

“We want to highlight all these items, but it’s not easy to do this, because you never know what’s coming off the farm,” Evans says. “Something could go wrong with the weather or the soil, or there could be deer. And we want to be true to our core menu Southern staples all year.”