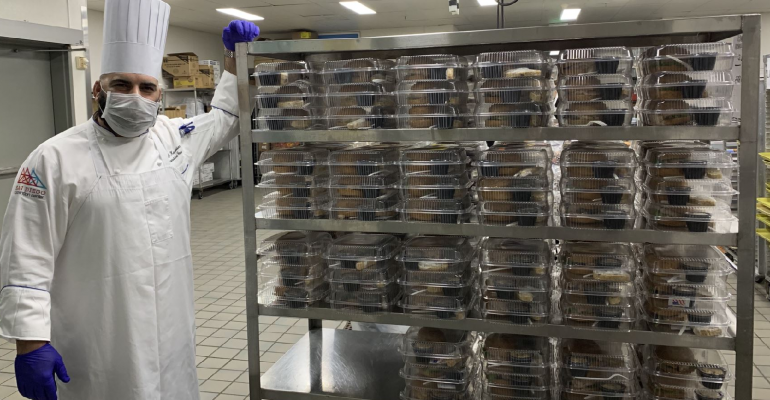 Centerplate chefs stock a delivery cart full of meals for unsheltered guests, who were relocated to the venue from three local shelters in April.
News & Trends

In April, the San Diego Convention Center was transformed into temporary housing for 1,300 unsheltered people through Operation Shelter to Home, a partnership between the city of San Diego and a number of local entities. The initiative, which is funded by the city, provides guests with beds, showers, laundry, regular COVID-19 testing, and other services—including three meals a day. All those meals are prepared on site, packaged and delivered by Centerplate, the convention center catering team.

Bobby Ramirez, Centerplate general manager, says that just a few weeks after San Diego’s initial pandemic shutdown, the convention center welcomed its first 250 guests. They expected the number of residents to climb incrementally. But halfway through April, the guests numbered more than a thousand.

Related: Stories from the front lines: An Indiana K-12 food service director’s story of feeding kids during the coronavirus crisis

It was challenging to feed that many people so quickly while they were still putting protocols in place. “As we were focusing on safety, the numbers that we had to support were also growing,” he says.

To pull it off, Centerplate staff had to reimagine and restructure its services—and fast. 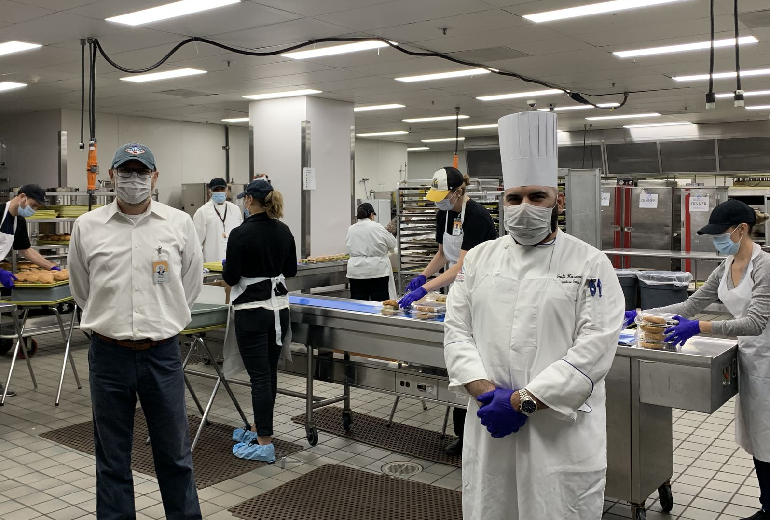 Ramirez says the staff removed supplies to create space for physical distancing in food preparation areas. They increased the amount of space between each workstation, marking each one with a taped “X” on the floor.

The staff split their operations between two kitchens. The main kitchen is used exclusively for preparing and packaging lunches and dinners. The smaller bakery has been repurposed as a breakfast hub. There are now maximum numbers of workers allowed in each one: up to 27 in the large kitchen and up to 14 in the smaller one.

Centerplate, whose parent company is Sodexo, started planning weekly menus based on available ingredients and their expiration dates. As the pandemic has stretched on, they’ve shifted to more purchasing. Each week the culinary team, led by executive chef Daryl O’Donnell and senior executive sous chef Sufi Karaien, prepare simple breakfasts, sandwich- or salad-anchored lunches and hot dinners for each guest.

Light breakfasts might include a hard-boiled egg, overnight oats, a pastry, or a bagel with cream cheese along with a piece of fruit, juice and coffee. Sandwiches are typically lunchmeat and cheese on a rotating array of breads and buns made by a local bakery (think kaiser, brioche and focaccia) and served with chips, dessert and a chilled beverage.

Some lunches are fancier than others. One day, guests were served adobado chicken with peppered Jack cheese, Mexican coleslaw and chipotle mayonnaise on a ciabatta bun. Another, they ate a composed grain salad with herbed chicken, sun-dried tomatoes, hearts of palm, legumes and a Mediterranean vinaigrette. 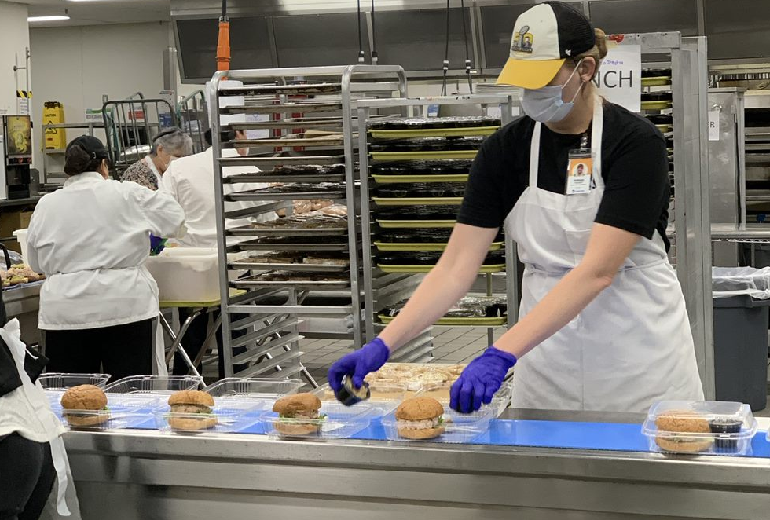 Culinary employees work out of two kitchens to comply with physical distancing requirements.

Guests receive two boxes at dinnertime: one with cold elements and one with a hot entrée. Dinners have included pork loin puttanesca, teriyaki chicken and fried rice, meatball ragout over polenta, beef enchiladas with rice and beans and grilled chicken Parmesan pasta bowls, to name a few.

The team tries to ensure that guests receive a variety of foods, Ramirez notes. They’ve even served some traditional holiday meals and designed entrées around national food days.

Once meals are prepared and boxed, the kitchen delivers them to three neutral zones where a service provider for one of the participating local shelters picks them up and distributes them to guests. Providers then drop the equipment, such as delivery carts, at a loading dock where they are disinfected, sanitized and left to sit for 48 hours before being returned to the kitchens.

It’s a busy schedule to feed this many people every day. And there are no built-in breaks, as there are between convention center events. But the staff is prepared to keep up the pace for a while.

San Diego Convention Center CEO Rip Rippetoe says, “We expect the Shelter to Home effort to continue for the next several months during this critical period of the pandemic,” adding that the current setup will depend on state and local restrictions on public gatherings. “We are in close coordination with the [c]ity to guarantee we can reopen for regular event activity at the appropriate time.”

Ramirez says they are constantly reassessing how they can make the experience safer for guests and for the many essential workers on site, and will continue to do so until the situation changes.

“It’s truly an honor. It’s so humbling to be part of this.”