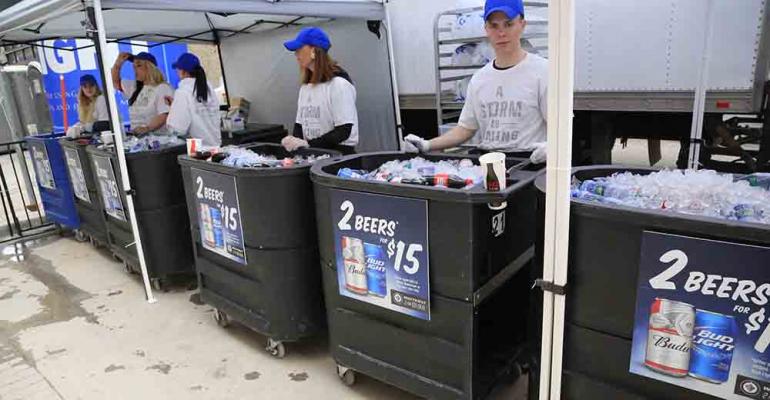 Centerplate
Food trucks and 30 tents have been deployed by Centerplate to feed (and quench the thirst) of Winnipeg hockey fans enjoying postseason success.
News & Trends

Hockey fans have flocked to “Whiteout” gatherings around Winnipeg’s ice arena, and concessionaire Centerplate has set up food and beverage stands to accommodate them.

The National Hockey League’s Winnipeg Jets and the American Hockey League’s Manitoba Moose have been the toast of the Western Canadian city as they make strong postseason runs to the Stanley and Calder Cup Finals, respectively. And the teams’ fans have been supporting them not only by packing Bell MTS Place, where both teams play their home games, but increasingly, the areas surrounding the arena as well.

Called Whiteouts, the street parties take place during home playoff games, drawing white-clad fans who couldn’t get a ticket to go inside. Instead, they can catch the action on five big, flat-screen TV monitors set up around the arena and surrounding streets. There’s also a separate, alcohol-free fun zone with its own screen where families can take kids. The growing crowds are a natural market for food and beverage sales and Centerplate, the company that operates concessions inside MTS Place, has jumped into the breach with food trucks and more than 30 tents that serve a menu ranging from beer (naturally) to a series of themed food specials such as Whiteout poutine (white cheddar cheese curds and white béchamel cream sauce “with a touch of heat”), blizzard pizza (garlic cream sauce, roasted chicken and bacon crumble) and the chicken ranch Whiteout waffle cone (breaded chicken bites and white “Kickin’ Ranch” sauce in a waffle cone for easy portability). The company has also crafted some specialty cocktails such as the Jet blue and the Winnipeg Whiteout especially for the postseason runs of the teams.

“The crowds have been growing outside from about 6,500 people the first night to about 9,500 the second night,” he says. That was in round one of the NHL playoffs, which the Jets ended up winning to advance.

“It then pushed up to as many as 16,000 people outside, and the size of the party keeps growing,” Vidal adds. “It’s now the virtual shape of a hashtag, so it’s called the hashtag street party locally, and it’s set up to do north of 22,000 people now.”

The street party had been planned and promoted by the city after the Jets qualified for the playoffs, but it has expanded beyond any original expectations.

“It started out on a couple of streets and we maximized that space [in the first game], so for the second night we doubled it and filled it and been following that pattern ever since,” Vidal says.

Set up for the street parties generally begins around noon for an evening game, with teardown not coming sometimes until about one in the morning. The tents and food trucks begin serving two hours ahead of puck-drop time and stay open through the end of the game and maybe a little after depending on the crowd and its mood—obviously, wins generate more of a desire to stick around to celebrate.

The themed menu items were created especially for the postseason run and are also served inside the arena during home games and viewing parties for away games.

“We wanted to come up with some food ideas to meet the energy of the [fans], give them something else to kindle their cheering spirit, and they have been received very well,” Vidal summarizes.

Sales inside the arena have also been booming along with the on-ice success.

“The fans are obviously burning the calories as they’re cheering and we’re happy to help replace them,” Vidal laughs.