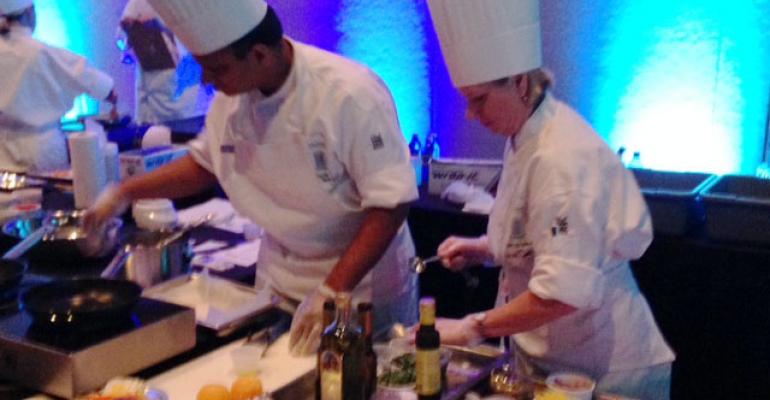 Since leaving the commercial world of cooking and a job with a contract management company three years ago, Aatul Jain has been busy changing the way hospital food is perceived at not just Saint Clare Health System in Denville, NJ, but nationally.

After making the top five of the Association for Healthcare Foodservice (AHF) Culinary Competition the last two years, the chef and retail operations manager and his director, Joanne McMillian, led Saint Clare to first place in this year’s competition at the fifth annual AHF Annual Conference in Orlando.

“As a chef, my objective is to transform hospital food into healthcare cuisine and ensuring that the taste is there,” said Jain, who also last year took second on an episode of Chopped, the popular Food Network show.

Also, Patti Oliver, director of nutrition at UCLA Health, was honored with AHF's Lifetime Achievement Award for her contributions to healthcare foodservice. She's been at UCLA since 1999, leading a system that serves more than 3.4 million meals a year at two hospitals. She's also served on the AHF and legacy association board of directors since 2007.

Dick Hynes, director of consultant services and healthcare for Hobart Corp., was honored with the 2014 AHF Making a Difference Award. Hynes has worked 46 years with Hobart and served on AHF and legacy committees for more than a quarter century.