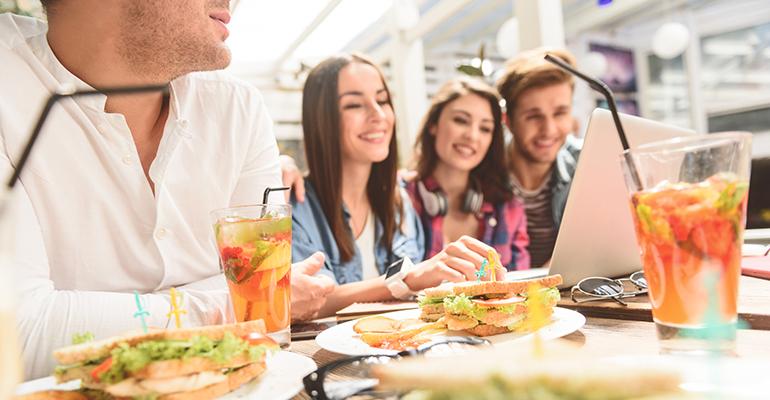 From memorable food experiences and tasting menus to grandma’s cooking and ultra convenience, young consumers put the pressure on dining providers outside the home, says a Y-Pulse survey.

Memorable, immersive food experiences, quickly secured on-the-go meals and trustworthy food providers are some of what millennial consumers want from foodservice, according to the just-released “2017 Y-Pulse Modern Consumer: Understanding Tomorrow's Tastemakers Today” study from the Y-Pulse research and consulting organization. The group surveyed 884 US consumers between the ages of 18 and 34 about their attitudes, expectations and tendencies regarding dining outside the home.

According to Y-Pulse, the data revealed five clear trends that operators serving this demographic need to keep in mind. They include:

With 71 percent of respondents saying they love to attend food-focused events and 81 percent stating that they enjoy exploring new cultures through food, it’s clear that for millennials, dining outside the home transcends even traditional “eatertainment” platforms to become something that combines socializing, entertainment and education in one experience.

Y-Pulse cites developments like the rise of food halls, fancy food emporiums and food festivals that offer fully immersive experiences as reflecting this trend, but it can also be seen in the increasing diversity of food concepts demanded in college dining venues by students.

Just as one example, students at Washington & Lee University in off-the-beaten-path Northwestern Virginia, recently voted for a quirky Turkish/Persian/Greek food concept over more traditional Mexican and Asian options as their choice to occupy a major dining venue on their campus.

Nearly half (48 percent) of the young consumers surveyed said they seek out restaurants run by critically acclaimed chefs and over two-thirds (69 percent) said they love restaurants with chef's tasting menus. Meanwhile, 61 percent wished they could dine on more foods that remind them of their grandmothers' cooking, and 69 percent wished for foods that remind them of their childhoods.

What to make of these seeming contradictory responses, in which novelty and nostalgia teeter in precarious stalemate? “Whether they target the nostalgia or provide sophisticated tasting adventures, foodservice operators need to aim for ‘unforgettable’ experiences,” is how Y-Pulse explains it. But one possible compromise area is menuing more “comfort foods with a twist” where traditional favorites are served in innovative versions.

Of course, not all outside-the-home dining occasions need to be once-in-a-lifetime experiences. Sometimes a meal is just a refueling occasion, and for such instances, millennials are out to be the ultimate no-muss/no-fuss crowd. For example, 48 percent of the Y-Pulse survey respondents said they prefer eating meals on the go and 44 percent said that convenience is more important than cuisine(!). Y-Pulse interprets this as a demand for more grab and go, but it can just as easily be a demand for electronic preordering and quick, efficient delivery options. It might also be interpreted as a growing market for more service points with fast, convenient access such as kiosk carts and strategically placed food trucks.

It is a commonly held belief that millennial consumers have much more concern about where their food comes from than previous generations. The Y-Pulse survey supports this, with 68 percent of the survey respondents saying they prefer local sourcing of ingredients and 66 percent indicating they are willing to pay a little more for food that comes from local producers.

This is certainly borne out by the experiences of college dining operators, who see growing calls for more local sourcing, a trend deeply burrowing into all onsite segments, even K-12 schools. Operators can maximize the impact of these procurement strategies by highlighting the growers/producers whose products are featured on the menu through signage, menu board mentions, etc.

If equal yearnings for both grandma’s and Mario Batali’s cooking or for memorable food experiences and convenience over cuisine weren’t contradictory enough, the survey also showed 67 percent of its millennial respondents saying they love ordering healthy options offered at restaurants and 63 percent saying they love restaurants that offer "over-the-top" menu items.

Y-Pulse explains it as “[t]oday's consumers want it all” but perhaps it’s a bit more subtle than that and a dilemma for foodservice providers who must cater to both indulgence and temperance. Hence the presence of both salads and double cheeseburgers on QSR menus and of mac and cheese bars sitting side by side with sushi bars in college dining halls.

"We found that young consumers, between ages 18 and 34, are greatly influenced by the foodie culture that surrounds them," summarizes Sharon Olson, executive director of Y-Pulse. "These trends highlight the direction of the foodservice industry in future years."

More than one-third (36 percent) of the consumers surveyed in the study were between the ages 18 to 25, with the rest between 26 and 34. The survey is a follow-up study of an earlier survey carried out in Culinary Visions Panel's 2016 Modern Consumer Dining Study. The latter covered the same scope of inquiry but surveyed 2000 US consumers of all ages.