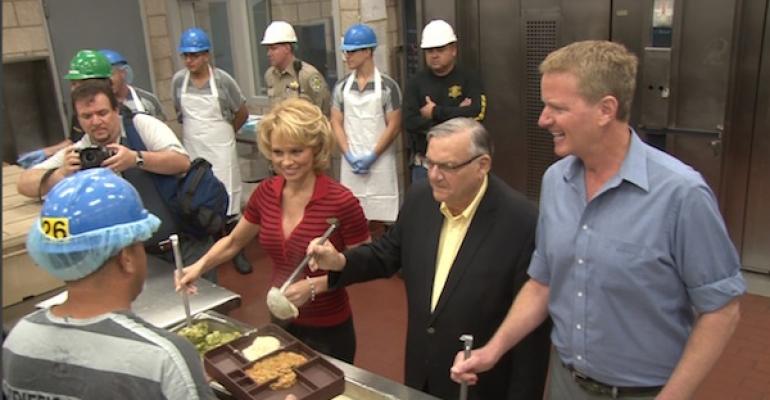 Former "Baywatch" star Pamela Anderson helped serve a vegan meal to inmates at the Maricopa County (Ariz.) Sheriff's Office Food Services factory on April 15 to help Maricopa Sheriff Joe Arpalo promote what was characterized as the first all-vegetarian meal in an American jail. Anderson was there as a spokesperson and representative of People for the Ethical Treatment of Animals (PETA), a vegan diet advocacy group, which is supporting Arpaio's initiative to transition foodservice at the county's eight jails to meatless dining.

"I am proud of our jail system," Arpaio says, "which surely ranks among the best in the nation, and am very gratified that our vegetarian meals are being recognized and lauded by PETA today. Those meals, which translate to serving an average of 8,300 inmates each day, are both nutritious and well-balanced and lower in cost than you'll find in any other jail anywhere."

The Aricopa Sheriff's Office calculates that eliminating meat has saved the county some $200,000 annually, not including other factors such as reduced electricity costs, not having to tailor a variety of meals to suit different religious convictions and other special requests, and having meals that don’t spoil as quickly as ones containing animal products.

"I believe people can be rehabilitated from the inside out,” says Anderson, a longtime vegan. “Jails are full of people wanting to change, to make amends, to learn healthier habits and understand compassion and empathy.”