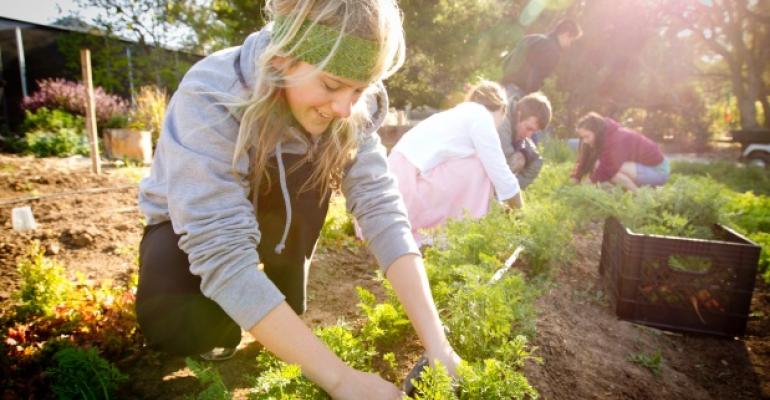 As of last fall, the school's onsite gardens have produced more than 5,000 lbs. of campus-grown, sustainable produce.

From a start three years ago with a quarter acre plot, the green dining/garden program at Westmont College has developed into a major campus sustainability initiative. Most recently, the school debuted Farm Fresh Friday, a weekly lunch special that features local and sustainable produce, including crops from the garden.

In 2011, Westmont alumnus Anthony Waldrop had been hired by the school's dining services provider, Sodexo, as a sustainability coordinator. His duties included developing a previously gardened area on campus that encompassed about a quarter of an acre. The first crops were mesclun lettuce, carrots, snap peas, cilantro and green onions and they were a success.

“At the beginning of each week, our chefs design recipes that incorporate seasonal produce from area farms or the Westmont Garden,” says Kevin O'Dowd, Sodexo's general manager at Westmont. “In addition to local, organic produce, we strive to introduce exotic fruits and vegetables to students in order to raise culinary awareness.”

“Our mission for Westmont Garden is to provide an interactive, hands-on opportunity for the campus community to learn about the nutritional and environmental advantages of eating local food,” says Anthony Waldrop, sustainability coordinator on campus. “Not only are we supplementing the campus dining service with fresh, campus-grown produce, but we are offering education and training on sustainable agricultural practices.”

The garden also supports the mission of Westmont’s Bread of Life Ministry by donating produce for their meal sharing program and Westmont Life Science classes participate in a mini-practicum in the gardens where they learn about sustainable agriculture and food systems while participating in the daily practices of the garden. Six students have participated in a semester long sustainable agriculture internship where they learn the ins and outs of food production within the context of the Westmont Garden Project. Fourth graders from a local elementary come to the garden to participate in garden activities and Santa Barbara Farm and Food Adventures has visited the garden to learn about the project and sample the produce from the gardens.

As of September 2013 the gardens have produced more than 5,000 lbs. of campus-grown, sustainable produce, which is featured in many dining recipes as well as in the salad bar.

“Last semester we got another grant from the Westmont College Student Association to put in more fruit trees,” Waldrop says. “We planted figs, dragon fruit, mango, grape vines, apple, persimmon, and guava. Within the next few months we are hoping to get to the 10,000 pounds harvested mark.”