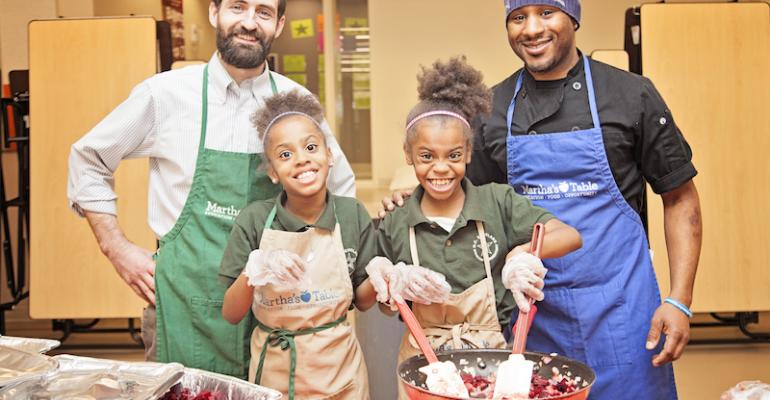 As local schools become ground zero for nutrition education and the encouragement of lifestyle changes to emphasize healthier behavior, independent organizations are emerging to educate students and families about healthy eating while utilizing school premises as a convenient community gathering spot. They are potential natural allies for school nutrition departments in the battle to spread the healthy eating message.

Among the most successful such local enterprises is Martha’s Table in Washington DC and its Joyful Food Market initiative, as parts of inner city DC are classic “food deserts” where residents have minimal access to fresh foods. That, in part, is why obesity and diabetes are rampant.

Martha’s Table, launched four years ago through a grant from the Target Stores Meals for Minds program, is looking to help alleviate that through a number of initiatives. Prominently, these include Joyful Food Markets, a regular series of special events that bring fresh foods to elementary school sites in the targeted areas, as well as cooking demos and interactive culinary activities designed for youngsters.

The Joyful Food Market events currently take place once a month (generally toward the end of the month when benefits start running out for those on public assistance) right after school lets out at about a dozen elementary school cafeterias around the city, plus a pair of community centers.

There are two components to Joyful Food Market days. One is a retail grocery called Martha’s Market in which students and their parents can “shop” for up to 23 pounds of groceries free of charge, with the only stipulation being that 40 percent of it has to be fresh produce.

“Every child and family is eligible,” says Caron Gremont, senior director of healthy eating for Martha’s Table. “They get a grocery list of what’s available that day and they can then shop in whatever order they want. They get to choose what they want. We believe very much in the choice model.”

The produce requirement is there because “we’re really committed to fresh produce as it is hard to access and expensive for people in these communities,” she says. The groceries are sourced through a local food bank, which also makes the connections with local growers who provide the fresh produce.

The second component in the two-hour event is a chef demo complemented with an interactive cooking class designed for youngsters, which features products from the market.
“We always have a chef on site doing a demo,” Gremont says. “We try to do one-pot meals based entirely on foods available at the market, which can be a challenge for the chef.”

The chefs who have participated in these events have mostly been from the Martha’s Table staff but Gremont says outside culinarians are more than welcome to participate.

The cooking demo is accompanied by sampling, followed by the kids’ cooking session that also almost exclusively uses the food available from the market that day.

For example, in May the focus was on squash and zucchini, so after the kids entered the cooking area, washed their hands and put on gloves, each was then given a cutting board and plastic knife to prepare the vegetables. Once the zucchini was cut up, the chef helped his young students sauté it, then add whole-wheat pasta and spaghetti sauce to make a pasta dish they could then share with their families.

“We specifically chose elementary schools because that is when children’s behaviors and habits are being set and also when parents are more open to information and support on how to feed their children,” Gremont explains.

“It’s meant to be very joyful and fun and have a really good vibe,” she adds. “Music and decorations help create the atmosphere (the Washington Post called it a “pop-up Whole Foods”).

The Joyful Food Markets have recently concentrated on Washington’s Wards 7 and 8, which are located in the city’s southeastern section across the Anacostia River, which tends to cut it off from the rest of the city, Gremont says.

“The average salary there is significantly less than in the rest of the city,” she notes, “the poverty rates are much higher and hunger is much more concentrated. It is one of the most vulnerable communities in D.C.”

It is also an area where food tends to come processed or prepared in a way that emphasizes empty calories, not nutrition. “We’re trying to change that and make healthy eating fun,” Gremont says.

By eliminating seven ingredients, a foundation aims to change school nutrition
May 11, 2015