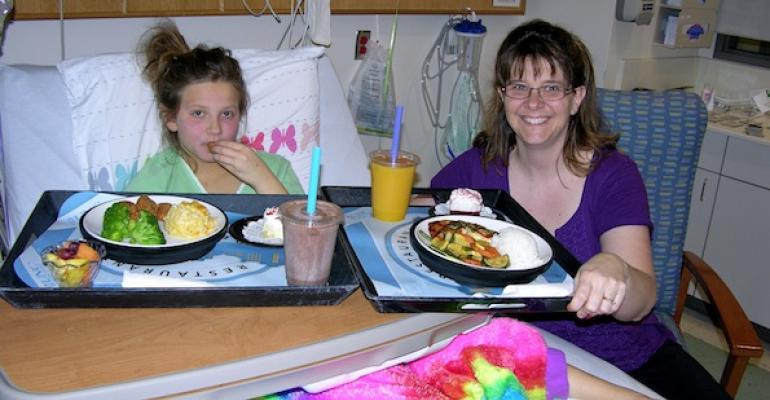 <p>UNC Hospitals patient Mackenzie Keesor enjoys a meal with and her mom Kamela, made easy by the hospital&#39;s new guest tray program, which allows both to order from the same source and menu and have it delivered at the same time.</p>
News & Trends

Sales of guest trays at University of North Carolina Hospitals used to average about $50 a month and they were basically a hassle for the dining services department. Now, they are generating about $10,500 a month and no one is complaining.

In fact, says Angelo Mojica, director of nutrition services for UNCH, the program may just be getting started as it hasn’t really been advertised much so far.

“It has been so successful that we’ve added two extra FTEs in our call center,” he says. “For the first time, patient services is making money.

UNCH’s guest tray innovation, which launched almost a year and a half ago, began with a phone call to order a pizza.

“I had just given my credit card number when it hit me that here I was giving out this sensitive financial information over the phone to a teenager who represented a business I really knew nothing about,” Mojica says. “Yet I did it just like thousands of other people do without really thinking. Meanwhile, in the highly respected healthcare facility where I work, we were taking only cash from visitors who wanted food to eat in the patient rooms because we were worried that they wouldn’t trust us with a credit card number.”

So Mojica set up a cash register in the hospital’s call center where patient room service orders are taken and started accepting credit card payment for guest trays. It was not advertised, but word of mouth soon started spreading, primarly from nurses and family members in support groups. “About three months in, it really jumped,” Mojica recalls.

The system uses UNCH’s Restaurant Delivery room service menu, which replicates the branded stations and menu choices available in the retail cafes (except for dietary restrictions). This eases operational requirements as both the patient and guest order off the same menu, have it prepared in the same place and get it delivered together so visitors can eat with the patient they are seeing. Guest tray options feature entrée/starch/vegetable/dessert/beverage combos for $7, though Mojica is contemplating a price increase.

Mojica says there are a number of side benefits to the program. “We find that patients are more likely to eat when they can eat with their families, and the guest tray option also reduces lines in our retail cafes.”