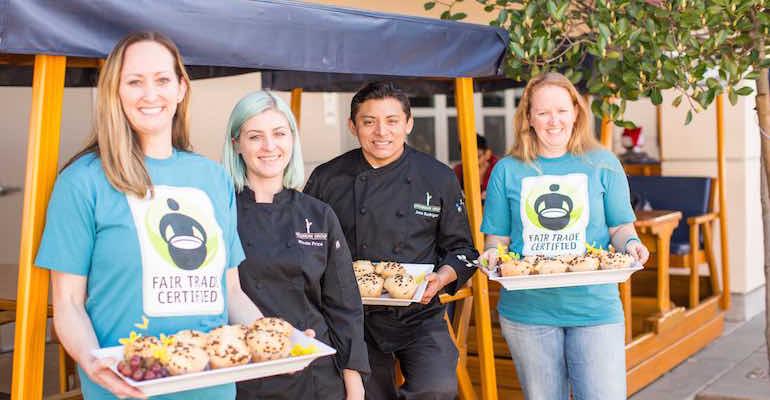 Marin Catholic embraces use of ethically sourced chocolate, tea and other goods with the assistance of foodservice provider Epicurean Group.

Marin Catholic High School in California is one of 18 K-12 schools across the country to achieve certification by Fair Trade Campaigns, a nonprofit promoting the sourcing of goods that are made by producers who received a living wage and are treated fairly and ethically.

The school achieved the certification earlier this year by forming a student Fair Trade Committee and working with dining services provider Epicurean Group to bring Fair Trade certified products to the campus.

“Lynn Maloney [a social studies teacher and student activities director at Marin Catholic] started the [Fair Trade] movement with some students there,” says Rey Hernandez, vice president and co-owner of Epicurean Group. “She approached us and what we’ve always done is try to bring those things to our communities where we manage: Fair Trade, organics, grass-fed beef, antibiotic-free chicken. They approached us and we partnered up with them and identified some products we were using that were Fair Trade.”

The initiative began last year at the school with Maloney and two other social studies teachers, Mimi Murphy and Katie Smith, leading the way.

Maloney and a Fair Trade Committee composed of students from all grade levels developed a chocolate muffin using Fair Trade chocolate and chocolate sprinkles Epicurean Group had been sourcing that served as a delicious and ethical centerpiece to a kickoff event held at the school late last year to introduce the Fair Trade program. The muffin is now a regular on the cafeteria menu.

Among Fair Trade products featured at the event and now available in the school cafeteria are teas, coffee, chocolate and even honey.

Marin Catholic does not participate in the National School Lunch Program [NSLP], so Epicurean Group has some leeway to develop lunch menus. “We run the gamut,” Hernandez says. “We do fresh pasta. Our chef there is very talented. When we have pasta, he has an industrial pasta-making machine and makes the pasta fresh, along with sauces like pesto, marinara and Alfredo all made from scratch. We also do pho, chicken Parmesan, pizza and hamburgers with grass-fed beef.”

Epicurean Group is now looking to extend the Fair Trade initiative by working with the Marin Catholic team on a turnkey certification kit that can be used by other facilities to achieve Fair Trade certification. Currently, the company has identified five educational campus clients interested in pursuing the matter.

Hernandez hopes to have the kit ready before the end of the current school year. He acknowledges that the initiative would be more difficult to implement in schools that participate in NSLP due to cost factors.