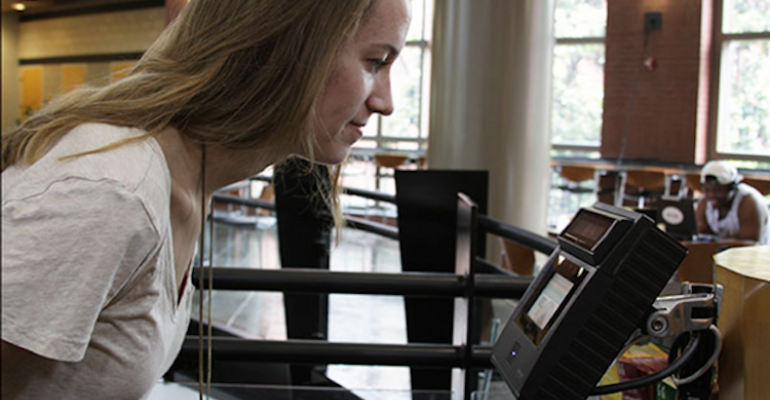 <p>Sarah Murphy, communications and office specialist for the VCU Department of Business Services, demonstrates the use of the new iris cameras in Shafer Court.</p>
News & Trends

Virginia Commonwealth University has installed two iris cameras that will allow meal plan holders to use their eyes instead of having to swipe their IDs to access Shafer Court Dining Center this fall.

"Students won't need their ID to enter the dining center anymore," said Stephen Barr, the director of campus services who oversees VCU Dining Services, in a press release announcing the initiative. "With iris identification, it’s as simple as a camera taking a picture of their eyes and two seconds later they walk through."

The new system, which is voluntary, is meant to serve as something of an express lane for students. "We thought it'd be a nice service for students to help everybody get through at peak times," Barr said.

Plus, he added, the iris cameras enable students who lose their IDs over the weekend, when the ID card office is closed, to still access their meal plans. "There currently isn’t a mechanism for students to get a replacement ID [over the weekend] so they can access Shafer. So how do they eat over the weekend? In the past, they've had to come out of pocket. Now they don't have to. This backup lets them get into Shafer so they can eat.”

Cashiers will remain in place for those who choose not to use the iris cameras, as well as for visitors and others entering Shafer Court.

The iCAM 7100 iris cameras, made by North Carolina-based ColorID, take a high-definition photo of the user's iris and identify more than 220 unique points, then generate a number that will be associated with that individual's iris.

"We don't keep pictures of your iris," Barr stressed. "It's just a number, just like your ID. Your ID has a unique number that ties it to you."

To sign up interested students, the university will have stations set up at Shafer Court and elsewhere during the first couple weeks of the fall semester.

Barr explained that VCU Dining Services chose to go with iris cameras rather than fingerprint scanners because it is reliable and does not require touching, a critical factor in a dining environment. "We're going to continually improve access to Shafer and see if there are other places [on campus] that we can expand this kind of technology to, as well," he said.