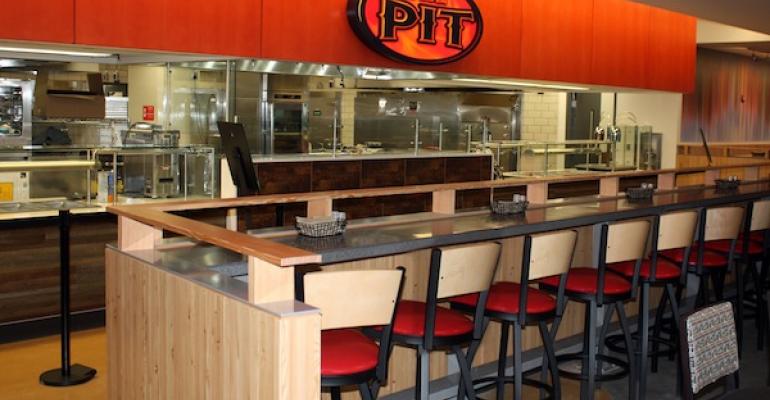 <p>The Pit, serving meats from its smoker, as well as grilled items, was the most popular station at MSU&#39;s new Edge at Akers dining hall in the early going.</p>
News & Trends

The Edge at Akers completes the school’s long-term project to update residential dining on campus.

They came, they saw, they ate.

When the newest renovated dining hall, the Edge at Akers, opened on the Michigan State University campus on Sunday, January 11th, it was move-in day for students coming back from the winter break. That meant lots of parents, families and friends packing the campus along with the university’s already gargantuan campus resident student population of some 15,000, the third largest in the country.

“The day started a bit slow because we didn’t advertise the opening but by that evening they were blowing the doors off,” says Jason Strotheide, executive chef for MSU Culinary Services in the school’s East Neighborhood. “We opened for lunch and had maybe 500 guests. At dinnertime we had 2,700.”

The menu remained the same throughout that first day and students slammed the Pit, one of six stations at the completely overhauled venue. The Pit serves smoker style meats along with vegetable entrees and grilled items, and this obviously appealed to students checking the place out for the first time.

“That smoker was definitely the leader of the pack that first day,” Strotheide offers.

Close behind though in popularity was the exotic stylings of the Tandoori station with its authentic Indian and other global cuisines, as well as Sticks & Noodles, featuring Asian and stir fry dishes.

These, along with Stacks (subs and deli sandwiches), Slices (pizza, pasta bakes) and Sprinkles (desserts) round out the food choices presented by this capstone to MSU's multi-year master plan to renovate its residential dining . It follows major overhauls of Riverwalk Market at Owen in 2009, Brody Square (2010), Holden Dining Hall (2011), South Pointe at Case Hall (2012). The Vista at Shaw Hall (2013) and Heritage Commons at Landon Hall (2014).

Edge at Akers is not the largest of these, with only 574 seats but should draw substantial traffic, especially in the evening as it is located inside a residence hall and between two others on the east edge of campus (hence the name). There is also substantial off-campus housing nearby with plenty of those students holding off-campus meal plans.

“Even before the renovation, this space had a robust late night crowd,” Strotheide says. That remained the case as the new venue, which stays open until midnight, saw about a thousand customers in the later evening hours, when it was serving a reduced menu of grilled items, made-to-order sandwiches and pizza. The facility opens daily for breakfast at 7 a.m. and remains open continuously, though some stations are shuttered between traditional meal periods in the mi-morning and mid-afternoon.