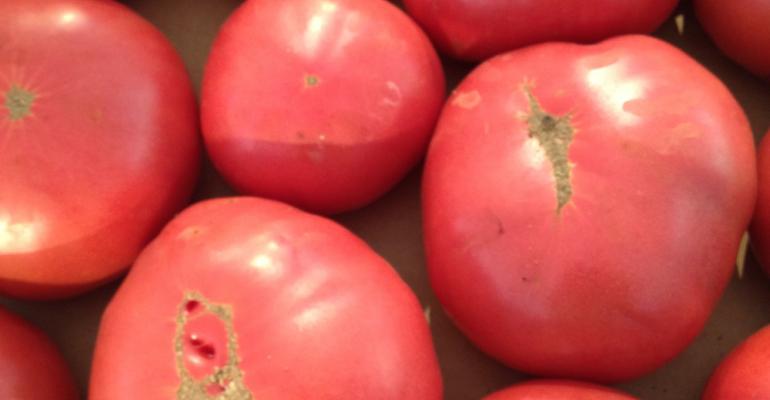 Local tomato bounty yields year's worth of marinara for Harvard

Specially developed recipe uses 8.6 pounds of tomatoes for each gallon of sauce.

Harvard University Dining Services (HUDS) partnered with local food entrepreneur Karl Dias this summer to develop a custom marinara sauce recipe that reduced sugar, sodium and other preservatives while making the most of a seasonal crop for year-round enjoyment. The department utilized 120,000 pounds of Massachusetts-grown tomatoes to produce 14,000 gallons of the sauce, which is now dressing dishes on plates across multiple Harvard dining venues.

Dias collected the fruits, part of a bountiful harvest, from six area farms for the HUDS' custom batch of sauce. The recipe was originally intended to use "dropped" tomatoes that are less marketable because of blemishes, but with the overwhelming yield made even top grade tomatoes available, as “farmers couldn't sell them fast enough,” according to a HUDS press release.

For HUDS, this project represented an opportunity to further support the local food economy, said HUDS Managing Director David Davidson in the release.

"We buy an enormous amount of locally grown, caught or made food. But the bulk of New England's growing season is when school is out," he said. "So we wanted to find a creative way to further utilize local produce in a way we can enjoy all school year long."

HUDS connected with Dias when he joined a Massachusetts Farm to School Project meeting where several schools agreed to a trial of a sauce made from gleaned tomatoes. It proved so successful that the department moved forward with a recipe that yields one year's worth of sauce, using 8.6 pounds of tomatoes per gallon of the finished product.

"It's really important to find creative solutions to the sustainable food challenge," Davidson noted. "This sauce is a great example of thinking out of the box to expand local purchasing. When you serve as many meals as we do, you have a real opportunity to support the vital local agriculture economy."