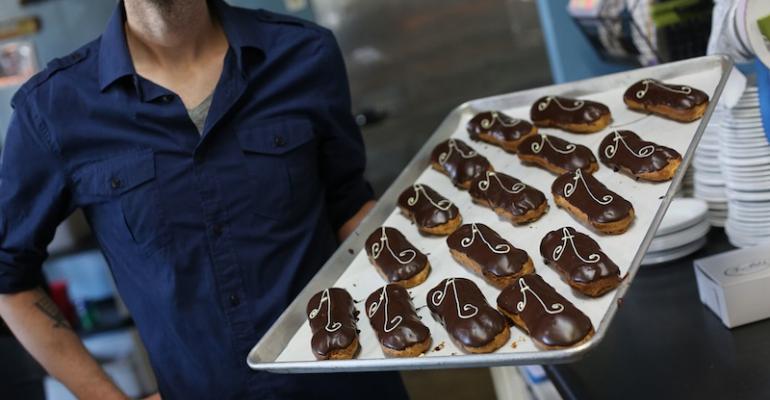 <p>Amelie&#39;s is known for its classic French pastries such as these eclairs.</p>
News & Trends

The College Plaza cafeteria in uptown Charlotte’s Two Wells Fargo building is no more. The eatery had served employees of the building and surrounding facilities since the late '80s.

Now, that location, along with some surrounding space, will be converted into an 11,000-square-foot combination production kitchen and foodservice emporium by Amelie’s, a French bakery concept with a number of locations in the Southeast.

Much of it will operate as a commissary bakery to supply other Amelie’s locations with freshly made goods, but a portion will become a retail dining operation that will serve café fare such as freshly made sandwiches, salads and soups, says Amelie’s Marketing Director Stephanie Haviv. “We’ll also have a creperie that will make French style crepes to order,” she adds.

Plans for the massive space also call for beer and wine bar and coffee bar sections that should attract traffic in dayparts beyond the lunch crowds. It will be open 24 hours on Thursday, Friday and Saturday, taking advantage of its location near some high-evening-traffic venues like Time Warner Cable Arena, BB&T Ballpark and the Blumenthal Performing Arts Center. It is also only a few blocks from the Charlotte Convention Center.

During weekdays, customers are expected to be drawn from the 32-story building’s office population that had previously patronized College Plaza cafeteria, as well as workers from adjacent office buildings and residents of nearby hotels and apartments in Charlotte’s booming uptown section.

Scheduled to debut before the end of the year, the Two Wells Fargo Amelie’s replaces a previous Amelie’s in uptown Charlotte that had closed down late last year.