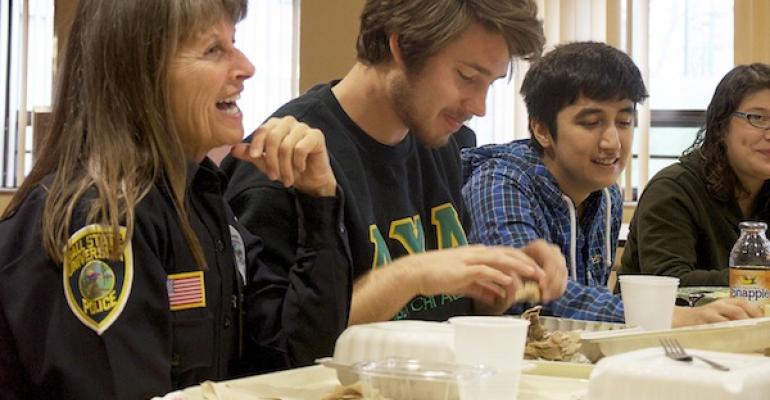 <p>A Balll State campus security officer shares a meal with students as part of a new community policing approach aided in part by a dining service program that foots the bill for the meals.</p>
News & Trends

Dining Services pays for officers and students to share a meal as part of community policing and theft deterrence initiative.

As is typical at many large universities, Ball State has a problem with shoplifting at its busy retail locations, which constitute about 90 percent of the all-a-la-carte dining program’s business. But it was a problem difficult to get the campus police to take seriously until recently, when a new campus police chief provided the opportunity for a fresh start.

“Our new chief, James Duckham, suggested inviting students to eat with officers as one component of his community policing program,” says Jon Lewis, director of Ball State University Dining. The result has been a new emphasis on having a security presence at the dining locations as well as improved relations between campus police and dining services as well as students.

The program provides a declining balance meal card to Duckham, who passes it each day to an officer working the community policing beat at the dining locations. The officer can then use the card to have lunch with a student. Dozens of students have already participated and there is now a waiting list.

The initiative brings a regular police presence to the retail dining areas for really the first time, resulting in a number of arrests of shoplifters that will hopefully make others with similar intentions think twice.

“Especially in a crowded serving area, when you see an officer make an arrest, it sends a message,” Lewis says. “And our campus department that oversees disciplining students takes it seriously. A shoplifting arrest is not a pretty sight and they face the consequences.”

Even without arrests, just the presence of officers in retail dining locations makes a difference, Lewis says.

“If you’ve got a police officer in uniform sitting at a table in the dining room near the cashier’s station, that becomes a deterrent for shoplifting by itself,” Lewis notes.

The cost of the card, absorbed by Ball State Dining, is minimal, really only about the third of its face value that represents the food cost. Meanwhile, the benefit gained from that negligible investment comes not just from deterring theft but also from developing relations with the campus police, both for students and for the dining department.

Already, there are signs that there are more social interactions between students and campus police, partly as a result of getting to know each other over the informal meals. Duckham's community policing approach has also emphasized more face-to-face interaction by making his officers get out of their cars and walk the campus.

Lewis says the expanded interaction with campus security has also served as a kind of learning experience for him and his staff.

“For example," he says, "they told me that most shoplifters actually do buy something to make themselves look legitimate while walking out with other items. I never knew that.”