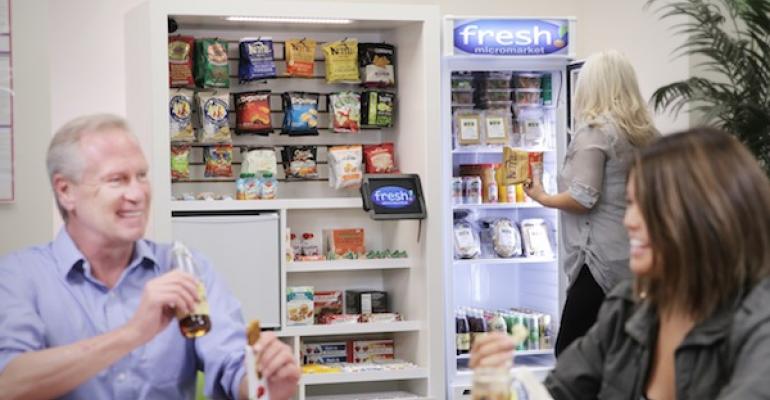 With only 150 employees, a full café was not feasible for Tarr Inc., but it still wanted a fresh, healthful onsite dining option.

When Internet marketing/online media firm Tarr Inc. moved into its new San Diego headquarters in the fall of 2014, it was looking for an onsite foodservice option that would satisfy the company’s culture.

“We are a health-focused company. We sell weight-loss supplements online and our CEO is very health-conscious,” says Human Resources Manager Jessica Harper. “So I did some research and looked into vending machines that specialize in healthy food.”

“We’re not quite big enough for a café, but we wanted more than just traditional vending,” Harper says. She came up with a firm called Fresh Healthy Vending that offers micro-market style outlets emphasizing freshly made, healthful choices.

The Tarr micro-market sells snacks, including healthier snacks, as well as freshly made meal options.

The facility is surrounded by outside dining options—cafés, restaurants and QSRs—but the micro-market remains popular. In fact, at the beginning its stock was depleted much more quickly than anticipated so the replenishment schedule had to be adjusted.

“I told them [Fresh Healthy Vending] when we signed on that we’re a pretty needy company,” Harper says. “They now refill every couple of days and we still use up just about everything. Our employees love the fact that they can go upstairs and grab carrots or a fresh sandwich rather than having to use their lunch break to go drive somewhere.”

The round-the-clock nature of the micro-market also suits Tarr’s flexible work schedules, as employees often come in very early or stay later into the day.

The food options consist of fresh sandwiches and salads primarily. There are also breakfast wraps.

“We switch out so we don’t have the same food in there all the time,” Harper says. “There’s a menu you can order from, so we just picked a bunch of things we like and they switch them out for us. But if you want something specific on certain days they can accommodate that as well.” She notes that the CEO likes a specific green tea, so that’s always included.

“The selections aren’t just bland and traditional, you can tell they’re higher quality than you get at, say, a 7-Eleven-,” Harper adds.