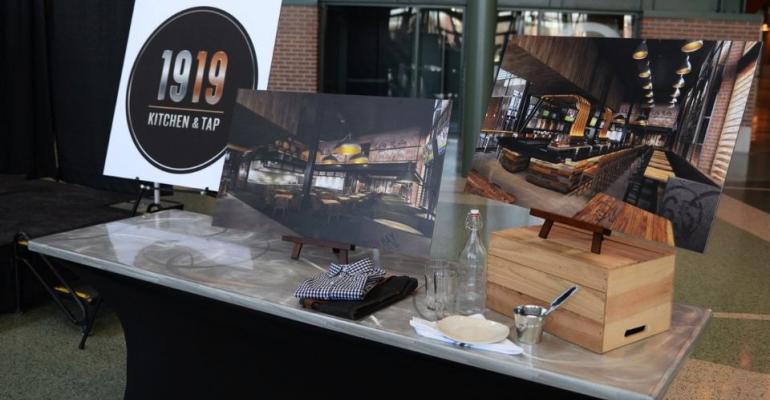 <p>Display of the new eatery&#39;s logo and architectural photos during the news conference announcing the 1919 Kitchen &amp; Tap.</p>
News & Trends

The 1919 Kitchen & Tap will feature innovative twists on old favorites from an open kitchen production area.

The Green Bay Packers and concessionaire Delaware North Sportservice plan to open a gastropub restaurant called the 1919 Kitchen & Tap at the team's Lambeau Field home stadium in late July, the team has announced.

Located in a new space on the stadium Atrium’s first floor, it will offer a menu of innovative twists on old favorites while highlighting locally sourced ingredients and served from an open-concept kitchen that allows visitors to see and hear their food being prepared. There will also be a bar with 80 beer taps featuring a wide variety of selections. Seating capacity will be approximately 250 inside on the first floor of the Atrium, plus a hundred on the restaurant’s outdoor patio.

The 1919 Kitchen & Tap, which celebrates the year of the team's founding, replaces Curly’s Pub, which had operated on the Atrium’s second floor since 2003.

“We’re looking forward to the opening of 1919 Kitchen & Tap,” said Packers President/CEO Mark Murphy in a prepared statement. “We’ve been enhancing our visitor experience here in the Atrium over the past couple years, and this new restaurant with its location across from the new Hall of Fame will be convenient for all our guests. The restaurant, with its excellent food and atmosphere, will be a great addition to the Atrium.”