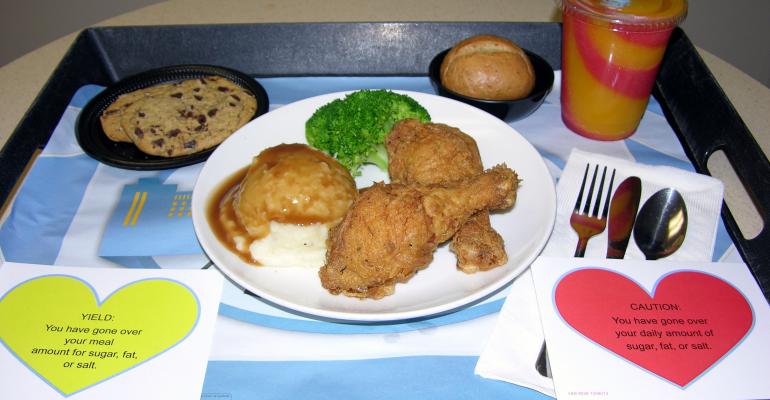 In soccer, the yellow card is a warning, while the red card means ejection. At the University of North Carolina Hospitals, both cards are warnings of different degrees to patients who order meals under the institution’s liberalized diet approach that are inappropriate for their conditions (no, they don’t get ejected if they don’t comply).

The cards are placed on patient trays ordered through UNCH’s Restaurant Delivery patient dining menu when the order conflicts with diet restrictions. It’s a way to dramatize warnings about meal selections while still leaving the choice in the patient’s hands.

“We had been talking about liberalizing diets here for years, but one of our dietitians suggested we try this instead,” says Angelo Mojica, director of dining and nutrition services. “I thought it was a great idea. When a patient on a heart-healthy diet orders fried chicken despite our warning about excessive fat and sodium, he gets a yellow card. If he does it again, he gets a red card and one of our dietitians goes and talks to him.”

Mojica says preliminary data suggests red carded patients do tend to make better choices subsequently, though a formal study has yet to be finalized.

The liberalized diet program is a concession to reality, he notes. While patients may be forced to comply with dietary restrictions in a hospital setting, they often lapse into old habits after leaving, which then raises readmission rates.

The liberalized diet approach takes a less confrontational tack, relying on persuasion rather than compulsion. The theory is that a patient who is led to comply voluntarily is more likely to maintain a diet regimen than one who had been forced to comply while in the hospital. The cards add an extra visual emphasis.

In addition, by allowing a patient to follow his own dietary inclinations at the hospital, the staff can better gauge subsequent behavior and adjust medications such as diuretics when the patient is discharged and will be on his own.

Mojica says the recent World Cup soccer tournament helped familiarize patients with the red/yellow card system (which are used by referees to warn or eject players), but that knowledge isn’t necessary to understand the cards his department uses since they include textual warnings citing specific violations of dietary restrictions for each patient (see photo).