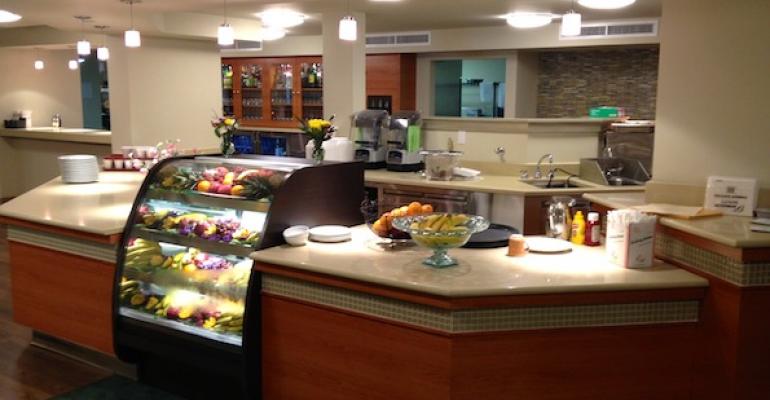 Abbey Delray South is a continuous care retirement community (CCRC) in Delray Beach, FL, north of Fort Lauderdale with approximately 440 residents. It offers 284 independent living residences, a mixture of apartments and condos in a campus-like environment, and 90 skilled nursing care residential units in its onsite Health center. Like many such operations, Delray South has been working hard to keep up with the expectations of the wave of “new seniors” entering their retirement years.

Much has been written about the changing profile of seniors, the change from the “greatest generation” group of those who came of age before and during the Second World War, and the Post-WWII Baby Boom generation, which began hitting retirement age in the past decade.

One of the critical divergent factors between the generations is food preferences, with older seniors preferring more traditional fare and Boomers being more adventurous and exotic in their tastes.

To better serve this emerging demographic, Delray South has looked to upgrade its dining offerings in two ways. First, it hired a new culinary director, Carey Benzenberg, a chef with more than 20 years of experience in senior living communities as well as a former executive chef with Fine Host Services.

The two dining facilities in the new Delray South include a formal dining room with waiter service and plated food. It is open for both lunch and dinner and serves fare like filets, salmon, lamb chops and roasted duck with raspberry sauce.

“The four-week menu cycle is very much geared to a five-star type of dining experience,” says Benzenberg. “It’s about choice: you can have a high end entrée or go with some lighter fare.”

The other venue is a casual bistro that serves pizzas, paninis and other lighter fare, including a salad bar. It has a coffee service and a frozen yogurt machine as well as a lounge with a full bar. Happy hours with wine and cheese events are a regular feature and Sundays feature a brunch menu. Breakfast on other days is served in the bistro only.

“A lot of the motivation for going to the bistro simply is due to how they want to dress when they come to dinner,” Benzenberg says. “Sometimes they just want to be a little more casual and sit back.”

The dining operation also offers a takeout system that features highlights from both the formal dining room’s and bistro’s menus. The orders can be called in or made in person and delivery is an option, though most prefer to pick up the food themselves, says Benzenberg.

“This particular community is one of the most active I’ve ever worked with,” he says. “Customization to your independent living needs is a huge thing here. One of the great benefits of running this dining department is that you can really tailor the experience to a group. We try never to say no."