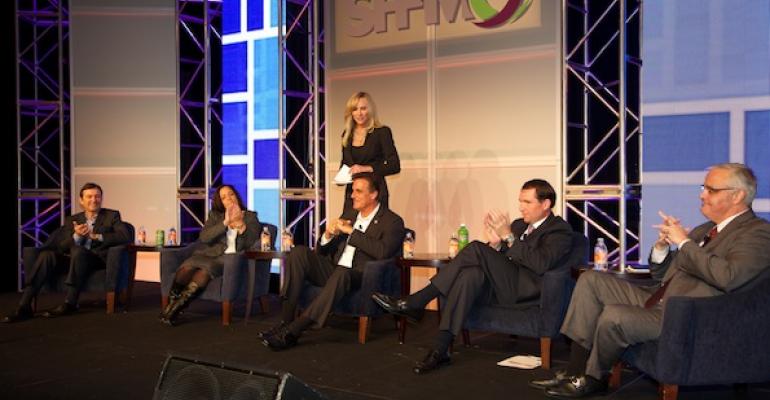 The Society for Hospitality and Foodservice Management (SHFM) wrapped up its 35th annual conference at the Mohegan Sun Hotel and Spa in Uncasville, Conn., on November 6th with a gala President’s Banquet that featured the bestowing of three significant awards (see gallery of awards here) as well as the passing of the gavel representing the society's presidency from Sabrina Capannola of the World Bank to Tony Kaszuba of RMA Hospitality Management.

Among those receiving awards at the closing banquet was John Lawn, former chief editor of Food Management and currently principal for JL&A Communications, who was presented the Lifetime Achievement Award by last year's recipient, Ron Ehrhardt of Compass Group. That award had previously been announced.

Revealed for the first time at the event were the winners of the Robert Pacifico Above & Beyond Award and the President's Award. The Pacifico, given to a deserving associate member in recognition of extended, exemplary and dedicated service to the society, his or her community and the onsite foodservice industry, was presented to Eric Von Kaenel, Avtec Product Specialist for Unified Brands, while Capannola recognized her World Bank colleague, Sharon Eliatamby, with the President's award, bestowed upon an individual who has been instrumental in the career of the president, assisted her throughout her term or has served the organization as a whole and dedicated her time to the betterment of SHFM.

Conference highlights also included the Inaugural SHFM Scholarship Showdown Competition, a student culinary competition held during the kickoff reception, which culminated with a scholarship for the final winner, Acenette Gonzalez of the Culinary Institute of America. Also competing were Matthew McDonald of Johnson & Wales University and Josh Perilli of the University of Massachusetts.

Capannola and celebrity Chef Marc Forgione served as two of the judges for the competition, while another celebrity chef, Jet Tila, was the MC for the event.

Particularly prominent was a roundtable session featuring a group of executives not often seen sharing the same stage, something that emphasized the collegiality of SHFM as an association representing the entire corporate hospitality and foodservice industry. Sharing the stage and taking questions from Barbara Kane of Ecolab were the heads of corporate dining operations for the contract management industry's "Big Three" companies: Mark Bickford of Sodexo, Rick Postiglione of Compass Group and Frank Kiely of Aramark, along with Kathleen Ciaramello of Coca-Cola and Kirk Tanner of PepsiCo.

Among the topics they discussed were the impact of acquisitions on company operations and customer relationships, the emerging technologies expected to impact onsite dining and the major threats to traditional onsite dining from changing work habits and external forces such as online ordering/delivery services.

Some of the changes in the corporate environment that affect dining were discussed in another panel on Space Utilization Strategies, where Janet Pogue, an expert on the changing corporate environment for the Gensler architectural and consulting firm, talked about trends affecting the physical corporate workspace; John Bevan of Capital One talked about the specific changes his company has made to the work environment in its various facilities; and consultant Brad Bachtelle of Bachtelle & Associates discussed one of the fastest growing innovations in delivering foodservice in nontraditional workplaces, the micro market.

The first day of the conference included Meyer's inspirational remarks as well as a rundown of food trends by noted and veteran industry consultant Harry Balzer of NPD Group (here is a brief recap).

A number of fundraising activities helped the society collect enough money from attendees to make an $8,000 donation to the Connecticut Food Bank.

A total of 400 people attended this year’s conference. The 2015 annual conference will be held next October 26-28 at the Sheraton New Orleans.