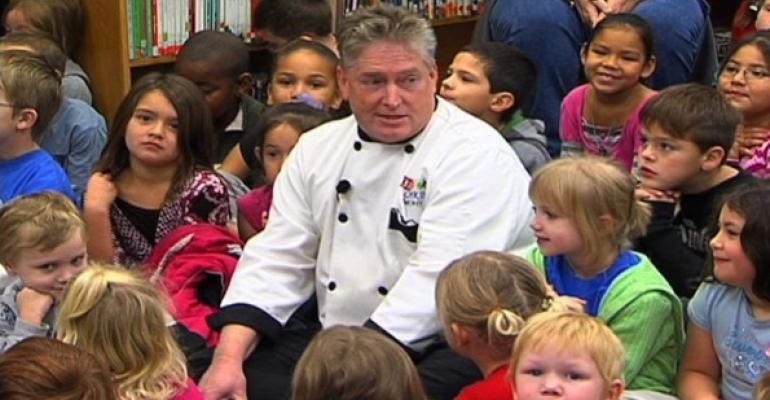 The 2016 Silver Plate winner in the K-12 Schools category says HHFKA regs were well intentioned but should have been tested before rollout.

Jeff Denton was always busy providing foodservices to someone. As an 8-year-old, the current director of child nutrition services for the Ponca City Public Schools in Oklahoma, was selling ham sandwich/chips combos to construction workers near his home for a quarter from his hand-drawn wagon. He could do that because his food costs were low: in fact, they were zero since he took the bread, ham and chips from his parents’ larder.

Of course, that lasted for only a short while, until mom and dad noticed the missing stock. Later, Denton graduated to setting up in business selling candy and snacks to classmates in junior high, a practice that would now run afoul of competitive food regulation being enforced in Ponca City by the adult Jeff Denton.

As a young adult, Denton continued to work in foodservice while attending the hotel/restaurant school at Oklahoma State University. He was in the school bakery by 4 a.m. and followed by work in the athletic department kitchens, where he got to know the coaches, including the future two-time Super Bowl winning head coach of the Dallas Cowboys, Jimmy Johnson, who was coaching at OSU at the time.

Denton went to work in hotels upon graduation but like many soon discovered that life in the commercial foodservice big time can have its drawbacks.

“I had been married a couple of years when one day my wife brought our son to the hotel where I was working and said, ‘I’d like you to meet him!’ We all lived in the same house, but I wasn’t around very much because of the job.”
That led to a drastic change. By coincidence, Denton’s hometown (Ponca City) had an opening for the child nutrition director position; Denton applied and got the job.

It wasn’t supposed to be permanent.

“It was something I thought I would do until I figured out what I wanted to do,” he recalls. “That was 26 years ago.”

Today, Ponca City Schools’ child nutrition program is one of the most celebrated in the country, especially among smaller districts. In addition to the Silver Plate, Denton received the Golden School Foodservice Director of the Year Award in the FAME (Foodservice Achievement Management Excellence) competition in 2014 and the district was FM’s K-12 Schools Innovator of the Year in 2013.

The reason is Denton’s success in creating a child nutrition program that meets the preferences of his young customer base while also satisfying regulators and parents on nutritional content—all while running a financially self-sufficient program that posted a surplus of $750,000 at the beginning of this past school year.

His program includes a strong education component. He visits schools endlessly to talk about food and healthy eating and holds a Junior Chef Camp at a local farm each summer where kids can see growing fields and farm animals while also getting some training in basic cooking techniques.

If that weren’t all, Denton is also a multimedia star with several TV programs and books on his resume.

What were your goals for the program when you first started?
My goal when I came in was to put out a quality product and boost participation. Early on I figured out that participation was the key to success, that if you could get a certain participation level then your chances of success are huge, but if you don’t, then it doesn’t matter what else you do.
They had been losing a lot of money, about $500,000 a year, at the time, which they didn’t tell me in the interview, by the way. When I found out, I thought ‘Oh my God! I gave up the hotel restaurant business for this?’
We had to overcome the stigma of the school cafeteria back then, as we still do today, so I reimaged the dining areas so kids would feel they were in a commercial establishment and then I varied choices. Growing up in those schools, I knew you went through the line and got only one thing, so we diversified our menu so that a child can always find something he likes.

How did you adjust to the Healthy Hunger-Free Kids Act regs?
Mostly we were already there. The biggest problem was portion size. Those were way off. What people don’t understand is that we have a very small window to eat, and when you mandate all these different portions, for little guys especially, they’re not going to get it down in that time. I think the cause was good, but the reality wasn’t. The reality was that we wasted a lot of food because they just didn’t have the time to eat and so they had to make choices.
If kids have a 20-minute lunch and they have to stand in line for five to 10 minutes of it, they’re going to take their most favorite thing and then work backwards. That’s just human nature.
Even as adults, if you went out to a restaurant to eat and they brought you your food and said, ‘OK, you have seven minutes to get it done,’ you’re going to go for what you want first.

How do you get around that?
We menu items that are easy to eat, that kids recognize and identify with and that they can eat quickly.

What in the regs would you like to see changed?
Some of the whole grains, because there are just some things that are not good whole grain. We found a wonderful pizza crust and our sandwich bread is good, but whole-grain waffles and whole-grain biscuits and even [whole-grain] pasta don’t handle well. They will someday but not yet.
I think the portion sizes are just too big right now, especially the fruits and vegetables in the breakfasts. It’s just too much for little guys and just a waste. Even if they had time [to eat it] it’s too much for them.
And finally the sodium restriction: it’s just not science based at this point. It’s not even accounting for naturally occurring sodium in foods. Renal patients don’t have the restrictions we’ve had!
The sad thing about the sodium restriction is that the qualifications alone really restricted scratch cooking and pushed schools to modified items because they had to take the sodium out to meet the requirements, and I know without a doubt that wasn’t the intention.
In the past when USDA did things, they tested it in different regions in both large and small markets. [These latest regs] didn’t undergo any tests whatsoever and it cost the industry millions of dollars. It was just poorly implemented though it could have been a really neat venture.

What were some of the things about the job that surprised you?
Lobbying and being involved in legislation at the state and national levels. I’ve been on the public policy committee of the SNA [School Nutrition Associaiton] for 18 years. Just to be able to meet with our legislators and make our case, I think that’s been very important.

What’s one thing you wish you knew when you started?
I would think it’s the resources [available to a director]. When I came in I really had no guidance. It took me some time to jump on board with what was then the OSFSA, [Oklahoma School Food Service Association, part of the national SNA], but when I did it was huge, and I wish I had jumped on board earlier because it was such an asset for me.

What are some of the trends you see influencing the child nutrition industry going forward?
In operations I see programs made so complicated that a lot of schools are going to contract services. They just don’t want to deal with it. I don’t want to say if it’s a good or bad thing, in some places it’s good and in some places it’s bad, but I see a lot of contract services coming simply because of the complicated nature of [the requirements] and the [inability] of school administrators to understand them.