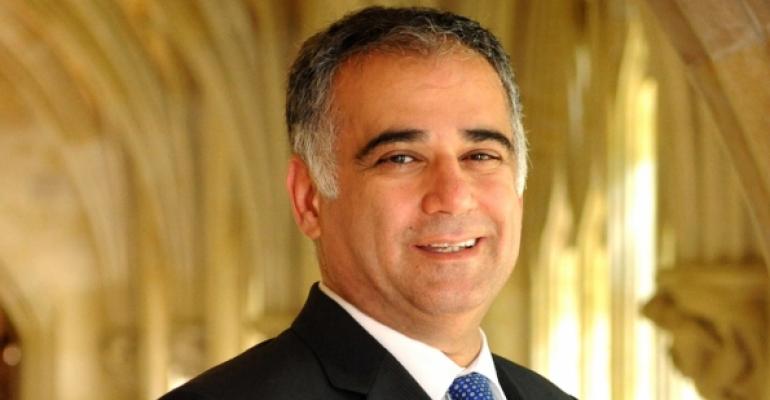 The 2016 Silver Plate winner in the college segment says not to worry about making mistakes and offers his insights into the future of college dining.

​Rafi Taherian originally wanted to be an urban planner. Born in Iran, he migrated to Italy as a teenager and attended the Istituto Universitario di Architettura di Venezia in Venice to study urban design while working part time in restaurants, ice cream parlors and pizza shops. When he came to the United States in 1986, his lack of facility in English led him to again migrate toward jobs where he felt comfortable, that is, foodservice.

“I wanted to immerse myself in the language and culture and I also had to support myself financially, so the natural place to look was where I knew I had experience and didn’t need to know all that much English,” he says.

Settling in Los Angeles, the first language he learned in the U.S. wasn’t English but Spanish. Today he speaks four: Farsi, Italian, Spanish and English.

Taherian started in this country with Marriott in Los Angeles, where he was soon on a fast track toward a hospitality career, quickly rising to general manager level.

To this day, he credits Marriott for the significant investment the company made in his hospitality training.

He left the company to start his own restaurant with a partner in 1991, which ended after two years with differences over the direction of the business and Taherian selling his share of the business back to his partner and going back to school—culinary school, this time, at the CIA’s Hyde Park campus—to bone up on classic culinary technique.

After graduating, he returned to the West Coast, taking a position with the CIA’s restaurant at its Napa Valley campus. This was the mid-’90s when the Bay Area’s culinary renaissance was just emerging, and Taherian found himself at its epicenter.

His position put him in contact with Stanford, which had a training program at the Napa CIA. The university’s dining services under the leadership of then-director Shirley Everett was at that time starting its own revolution in campus dining and Taherian was asked to join that program on a fast track to take over the executive directorship.

He accepted and helped lead the Stanford dining program over the next 13 years to be a trendsetter in the deployment of efficient fresh food preparation in a campus dining context.

Taherian left Stanford in 2008 to join Yale, where he saw a major commitment to using the dining program to build and sustain community. Over the past eight years, he has grown Yale Dining’s sustainability focus, with over 40 percent of its food now being procured from local sources committed to sustainability, and has fostered a culinary culture that has boosted program revenues by 42 percent.

What memory stands out in your early days at Stanford that told you this was a different environment than the restaurants you previously worked in?
“One of the chefs came to me one day and asked what I would like served as the vegetable side in the dining halls that evening with dinner and I said, ‘Surprise me! What do you have in mind?’ So I then watched this guy go to the storage area and get seven cans of cut beans and six cans of cut corn!

That led to a long meeting with Shirley in which she told me that that was exactly the kind of thing she wanted changed. ‘We already have dietitians looking at what we serve,’ she said. ‘What we need now are chefs.’”

What lessons do you take from your own early experiences in the industry?
“I think that a lot of people like me, coming from other countries, find themselves in a situation where you take an entry-level position and then shock people with how good you are at it. They don’t see the other tools you have in your tool pack and what is in your background. The service manager responsible for training me would often say to me, ‘You are the smartest cashier I’ve ever hired!’ But the thing is, you get boxed in to what people think you can do and not who you are and I think that’s a challenge we confront even today in the talent management end of the organization.”

What was the biggest lesson you’ve learned over your career?
“One that’s very meaningful is how you lead your team, how you get people around you not to compromise with mediocrity. How do you push for excellence? I am not the one providing the service—our people are the ones actually doing it.  We do 14,000 transactions [a day], we are so expanded and there are so many different areas. For anybody in my role, the ability to franchise people in what they do best and make sure they despise the status quo and mediocrity is probably the single most important thing I’ve learned in my career.”

What is something you know now but you wish you knew when you started your career?
“Don’t be worried about making mistakes. That will just prevent you from innovating. But be excited about opportunities and how you can make things different. I’m not talking about just technology. It could be something as simple as selecting the right towels and paper products. It could be anything.

And one more thing: don’t be afraid to tell stories. I found over the years that we are so busy that we don’t tell the story. We just feel [customers] will find out on their own, so we focus on doing it, not marketing it. For many years, I eliminated marketing dollars and put it toward food. Well, I think that’s a lesson I learned.”

Where is the college segment right now relative to the foodservice industry as a whole?
“I actually think we are in the post renaissance of the college/university foodservice segment. We have now gone as an industry through a major transformation, from where we at times were not respected—not recognized—by the industry in terms of who we are, what we do and what position we have in consumer demographics, to today, where we’re well recognized not just as innovators, but as influencers of behavior because we have the best access to 17- or 18- to 24-year olds.

Being on campus and being the onsite foodservice provider there is giving us the permission to make the box bigger and think outside of the box. Other segments, especially commercial segments, have to be worried about every decision that they make and how that is going to influence their sales. We don’t have to so much, and that allows us to innovate and implement initiatives that for many years were only associated with the high-end restaurants.”

What advice would you give to someone coming to the college foodservice segment for the first time?
“Don’t think you’re alone. Reach out and use the existing network within [NACUFS]. I’m proud of the fact that our segment has a history of collaboration and cooperation built within the platform of NACUFS. We don’t consider ourselves as competitors. That allows us to network and provide best practices to our peer schools and share ideas and initiatives.”

What is something in your career that you are most proud?
“We consider ourselves architects of memories. We build memories and memorable experiences for our extended family, who are the students. And if they feel that years later they come back and they say, ‘you know I can never forget this thing or that thing that happened,’ we consider ourselves successful. That’s what we’re most proud of: creating long-lasting memories in our students.”