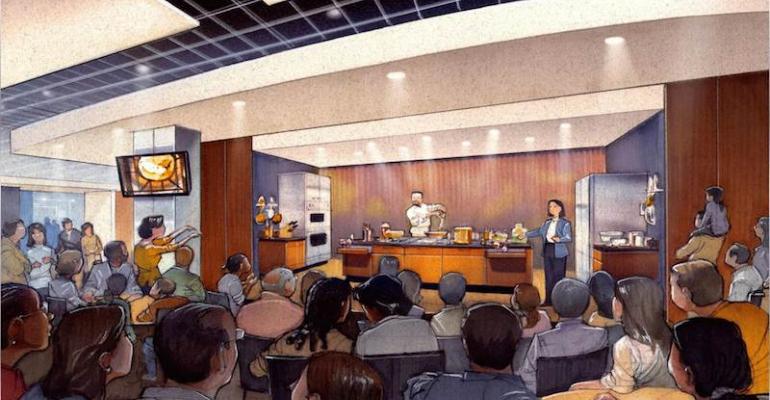 <p>Artist&#39;s conception of the new demo kitchen to be unveiled July 3 at the Smithsonian&#39;s National Museum of American History.</p>
News & Trends

Along with its new demo kitchen, the Smithsonian's National Museum of American History will initiate a series of “Food Friday” cooking events on July 3 in its Wallace H. Coulter Performance Plaza that will highlight different American food traditions each week through live demos and presentations from a series of guest chefs.

To support the program, Restaurant Associates, which operates the museum’s onsite foodservice, will prepare and serve a dish inspired by each week’s theme in the museum’s Stars and Stripes Cafe. The intent of the program, according to a release from the Smithsonian, is to “connect food programming to the ideas of invention and innovation.

The free 45-minute programs will combine cooking demonstrations with conversations between chefs, culinary experts and the public as a guest chef and Smithsonian host Jessica Carbone prepare a recipe and discuss the history and traditions behind its ingredients, culinary techniques and other relevant topics.

"The kitchen is a wonderful extension of our food history research, collections, and exhibitions," said John Gray, museum director, in announcing Food Fridays. "It will bring visitors of all ages together for a different kind of experience around food history that can expand to discussions about the roles they play in shaping the present and future of food in America.”

The first month’s agenda will focus on the theme Summertime in America and will feature Curtis Aikens on Southern barbecue/picnics (July 3), Llewellyn Correia of program sponsor Wegmans and Krystal Register, RD, on marinating, seasoning and filling chicken (July 10) and Angie Lee of Sur La Table on the summertime food traditions of the Eastern Seaboard (July 17). Restaurant Associates chef William Bednar is scheduled to preside over the July 31 event on a topic to be announced.

The program will run through December with monthly themes focusing on Food Movements in the 20th Century (August), Hispanic Heritage Month (September), Harvest Season in America (October), "The Land of Plenty": Thanksgiving and Native American Heritage (November) and Food Celebrations in America December).

Museums Get Creative With Catering
Jan 09, 2013