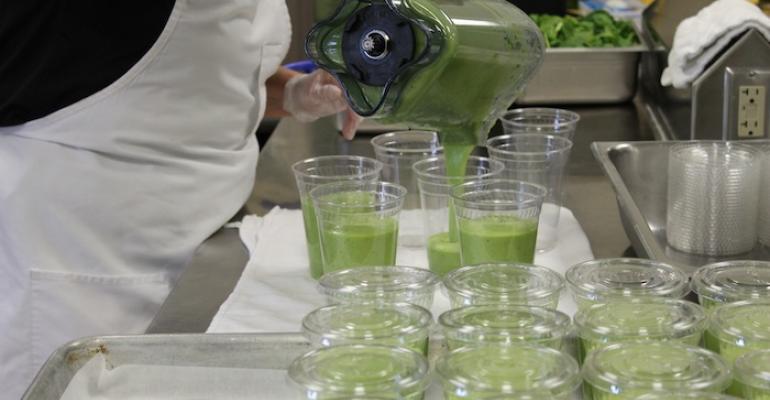 As in many schools, especially those enrolling older kids, the Alternative Learning Center of the Rochester Public Schools, in Minnesota, has had trouble getting participation in the school breakfast program. That may be changing, at least incrementally, thanks to a new smoothie station that currently sets up shop each Friday in the school cafeteria.

The station, with a smoothie machine funded by a grant from the Fuel Up to Play 60 project of the National Dairy Council and the NFL, has so far edged up breakfast participation at the school.

“Since starting smoothies on our menu four weeks ago we have seen the breakfast counts go up by about 20 meals the days we serve them compared to the days we don’t,” says Kayla Paul, RD, who is dietitian for the district. “We have breakfast-to-go concepts at a number of our schools, but this was the first site to have smoothies that meet [federal school meal] regulations,” she adds.

The program is still in the experimental stage, rolling out a new recipe each Friday to see which ones have the most appeal.

“Our goal through the end of the school year is to trial and error different smoothie recipes until we land on the student favorites,” says Sherri Knutson, nutrition services coordinator for Rochester Public Schools.

Knutson says one issue affecting fuller deployment of the station is labor. “We have to make sure we have the right ingredients to meet the breakfast guidelines, so we have to figure out staffingwise how to incorporate smoothies into the menu. Plus, we also want it to be kind of a novelty, kind of a treat, so it will be once a week for now, but we might adjust that depending on student reaction.”

The school still offers other, more traditional breakfast choices even when the smoothies are offered, but Paul says it is the smoothies that generate the most interest, which is great because they are a nutritious alternative.

“With these smoothies we have each serving count for one-ounce meat alternate (the yogurt) and 1 cup of fruit and/or veggie,” Paul explains. “Therefore they are a complete, easy on-the-go meal when offered with a grain (graham cracker).”

Knutson says the initiative has caught the interest of other principals in the district. “They’re contacting us asking, ‘When, Sherry and Kayla, can we get a smoothie machine for our kids?’ We’ve somewhat opened the door of interest here.”