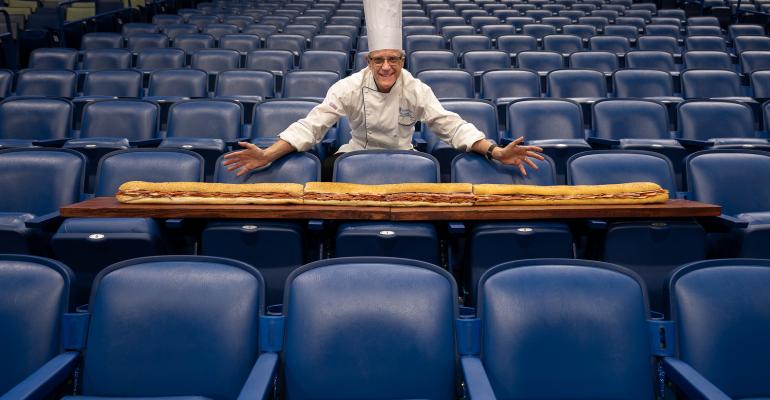 When men’s college basketball culminates its 2022 post-season tournament with its Final Four semi-final and championship games in the Caesars Superdome in New Orleans the weekend of April 2, the more than 100,000 fans expected for the games will be treated to an array of specialty menu options celebrating the city’s culinary culture as well as a special appearance by the Picnic automated pizza assembly station, all courtesy of the venue’s hospitality partner, Sodexo Live!.

The company has deep roots in the Big Easy, operating food and beverage not only at the Caesars Superdome, home of the NFL’s New Orleans Saints, but at the Smoothie King Center arena that is home of the NBA’s New Orleans Pelicans, the adjacent Champions Square outdoor festival plaza that is a popular tailgating spot, and the Morial Convention Center that is holding a Fan Fest in conjunction with the Final Four games. Sodexo Live! is also a veteran of these events, with this year being the tenth time the company (formerly Centerplate, which Sodexo acquired in 2017 and renamed last fall) has hosted the Final Four, including the sixth in New Orleans and second in a row after last year’s event in Indianapolis.

Leading the culinary efforts for the Final Four weekend at the Caesars Superdome is Chef Lenny Martinsen, who also oversees a WBL (work-based learning) program for local students aspiring to work in the culinary field. The trainees get certified in ServSafe food handling, in partnership with the National Restaurant Association.

The Sodexo Live! team for the 2022 Final Four is led by Senior Vice President Susan Fink and Regional Vice President Steve Trotter and includes General Managers Kernell Jupiter at the Caesars Superdome and Lisa Trainor at the Morial Convention Center, along with Executive Chefs Lenny Martinsen and Brandon Felder, all deeply embedded in Louisiana and bringing experienced tenures to the operations for the weekend.

“Our team, made up of employees exclusively from the surrounding region, is incredibly excited for this top-tier event, and our approach has certainly been enhanced to meet the moment,” says Steve Pangburn, CEO, Sodexo Live! North America. “From the automated Picnic Pizza Station, which will free our staff up to focus on other fan-facing tasks, to the basketball-themed items, we know everything will be a slam-dunk for college basketball fans to enjoy.”

One obstacle the team will have to deal with is a major, ongoing renovation of the Superdome “that we’re smack dab in the middle of,” Trotter notes, “so our team has had to work around that, moving areas and storage around to temporary locations and bringing in temporary cooler and freezers.”

In terms of pandemic-related adjustments, the biggest is being totally cashless, Trotter suggests, a development that was already underway pre-COVID but which the crisis accelerated. Otherwise, the city has lifted most restrictions on public events, so the venue will be at full capacity with no masking or social distancing restrictions.

The food and beverage offerings will emphasize local cuisine, vendors and ingredients for the many fans coming in from out of town to cheer for their teams.

“With tens of thousands of out-of-town guests visiting the Crescent City known for some of the best food in the world, it is important that the local flavors and essence of New Orleans is a part of their visit here in the Caesars Superdome for the game,” explains Zane Collings, General Manager for the Caesars Superdome. “Sodexo Live!’s long time service in New Orleans is sure to shine through.”

“These are both our partners and building partners throughout the year,” explains Trotter. “Some are branded on some of our concepts in different areas around the building so they are easily recognizable” while others supply ingredients such as the Leidenheimer breads used on sandwiches.

“We certainly use as much local product as we can,” adds Jupiter. “We locally source all of our seafood and we have our own custom-made taco meat and for seafood queso a natural cheese that’s made locally.”

The food menu includes a series of locally-themed creations such as a Cajun Shrimp Salad Sandwich, a Creamy NOLA Mac and Cheese and a Jumbo Muffuletta Po'boy created by a team led by Martinsen, who has hosted multiple Super Bowls at the venue, as well as the college football national championship, top-tier concerts and the annual Sugar Bowl. For a closer look at some of the items being served at the 2022 Final Four, go here.

In addition, a specialty cocktail called the Slam Dunk Spritz was created for fans to enjoy, consisting of champagne served over ice and garnished with a dried orange wheel and rosemary. It will be served at eight locations on both levels of the concourse.

“We’re only serving beer and wine for this event, so this is a cocktail type of drink that fits that and is also fan-friendly, offers quick service, is of quality and is fun and innovative, and we’re very excited about it,” offers Fink

The technological highlight of the event is the Picnic automated pizza unit that will be located—prominently and in full view of customers—in the Superdome’s Miller Lite Pub, dishing out cheese and pepperoni slices and whole pizzas at a rate of up to 100 12-inch pizzas per hour. It is a technological innovation the company has been testing for several years as a way to streamline production in large-volume venues. It recently deployed one at the Consumer Electronics Show in Las Vegas in early January.

“We wanted to bring them in right before COVID hit, which obviously changed the timeline of everybody’s lives, but as soon as we got an opportunity to get back with the Picnic folks, we wanted to get them in town because we really do think that this is a special, unique thing that touches a lot of different areas for everybody,” Trotter says.

“Picnic was founded on the belief that automation in food service can help address the challenges of food waste and labor shortages while increasing profitability,” adds Picnic CEO Clayton Wood. “This latest collaboration with Sodexo Live! is another step forward in showcasing our shared partnership goals and beliefs that kitchen innovation improves the experiences for staff and guests.”

To serve the huge number of fans quickly and efficiently—the events will have about 8,000 more seats at courtside than would be available at a football game—Sodexo Live! has made some adjustments, especially on the 100 level concourse where the extra seats are located. There will be nearly 500 points of service located throughout the venue, including 179 on the 100 level.

“We’ve also re-engineered our menus to things that we do great and fast so we can get the throughput through the stands, and we’ve made the beverage locations grab and go so a patron can come in, grab a beverage, grab a snack and check out and get back to his seat," Jupiter explains.

Excess food remaining at the end of the event will be donated to local groups like the Second Harvest Food Bank and New Orleans Mission. To reduce waste, all cardboard is being pickup up by a local recycling firm while the NCAA is partnering with Coca-Cola to deploy recycling bins for plastic bottles