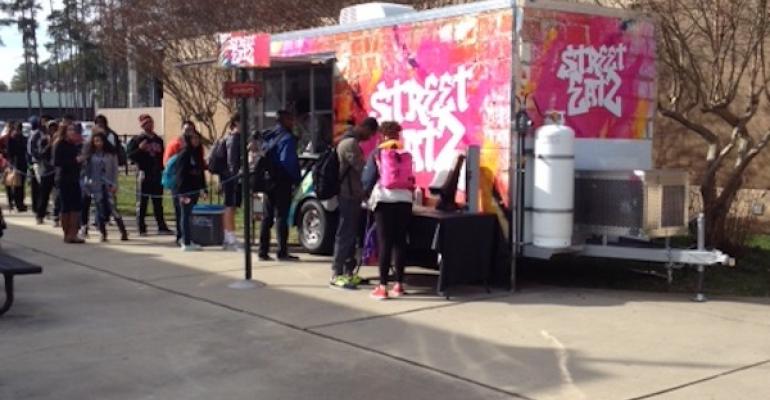 It’s hard to get teens to take school meals seriously even if they are on closed campuses. But the coolness factor associated with food trucks seems to be a good way to put a dent in that mindset and Sodexo is giving it the old high school try with a truck concept called Street Eatz.

The mobile eatery is being piloted at a number of client locations, including Rock Hill (S.C.) Schools, where the vehicle—actually a trailer towed behind a catering van—is rotating weekly through the district’s three high schools with different daily menus that are distinct from what is being served in the cafeteria.

The menu concepts range from barbecue (with a choice of three sauces) and chicken strips tossed with a choice of six sauces to pastas with four sauce choices. Each meal comes with a wide array of side items, including standards like baked beans to more exotic selections like a ginger carrot salad and a pineapple/cucumber/jalapeno salad. Each concept has its own unique sides such as cinnamon apple and an Asian broccoli salad. A “super salad” made with romaine lettuce, carrots, black beans, corn and diced tomatoes is served with all the concepts and can serve as a meal alternative for those who don’t want the day’s main entrée.

The object of the truck is to provide an attractive alternative to the standard daily choices, says Jeffrey Clarke, general manager for Sodexo at the district.

“The whole idea behind Street Eatz is that we can hit all the requirements of the traditional lunch in the week the truck is at a campus,” he says. “Plus, food trucks are very cool right now and Rock Hill has no food truck park so we don’t otherwise have a lot of this kind of food in the area.”

The Street Eatz menus are reimbursable, important in Rock Hill, where about 60 percent of students qualify for free or reduced-price lunches. The onboard POS is tied to the main system and quickly tabulates sales and subsidized meal qualifications.

The menu items are all premade as the truck has no production equipment, just holding units like a steam table, warming box and refrigerator.

The truck rotates weekly to each of the three high schools, typically being open for three days (usually Tuesday to Thursday) at each location contingent on factors like weather. A different menu concept is served each day so there is variety.

The truck’s appearance is promoted through announcements, signage, cafeteria TV monitors and even Twitter.

So far, the results have been mixed as the first week saw mostly sales that were cannibalized from the cafeteria. However, at the second week’s appearance, there was an incremental bump up of 50 to 60 meals a day beyond typical daily sales. Clarke admits the nice weather that week may have been a factor as it drew more students outside (Rock Hill policy allows high schoolers to go outside during lunch periods but not to leave school grounds).