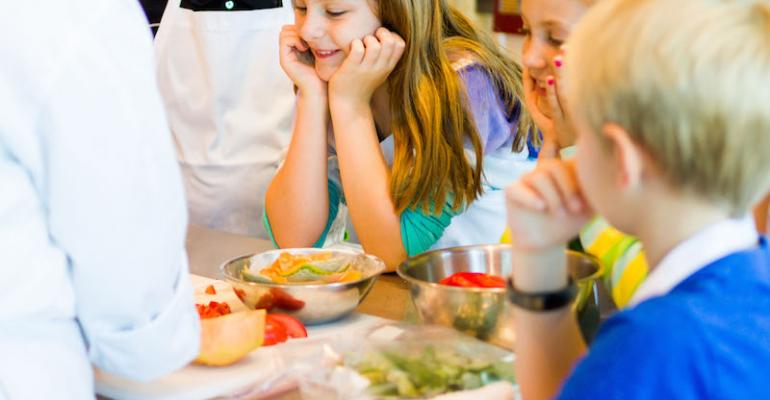 Four AVI Foodsystems chefs conducted a week-long Summer Cook Camp for a dozen youngsters at Gilmour Academy, a private Catholic K-12 school in Gates Mills, Ohio, near Cleveland. Most of the students, who ranged from 3rd through 6th graders, were from other schools in the area, making the event a promotional opportunity for Gilmour as well.

The camp was developed by Mel Weltle, resident director for AVI Fresh at Gilmour, where the company manages the onsite dining program for the school’s nearly 700 students, plus faculty and staff. It consisted of daily 7-hour sessions over a week in which the students learned about recipes and cooking techniques, as well as the health and sustainability benefits of the local ingredients they were using.

Groups of youngsters, each led by a chef, then was responsible for preparing a salad, entree, side dish or dessert for the culminating lunch. Each selection focused on wellness and culinary creativity, such as Porcupine Sliders, made with turkey burgers, dried cranberries, fresh baby spinach, Worcestershire sauce, and for that prickly appearance, brown rice.

For an added fun component, the campers decorated chef hats and aprons, with the most creative winning a $25 gift card to a local ice cream shop. There also was the Blue Spatula Award for the Most Valuable Camper.

“We had the campers in hats and aprons each day,” Weltle said. “They were having a lot of fun, laughing with the AVI Fresh chefs.”

Each session ended with a gathering of all the campers and chefs so they could enjoy the food they created and talk about what they learned, followed by a trip to the Gilmour Academy swimming pool.

The week ended with a culinary field trip to Cleveland's iconic West Side Market, where more than 100 vendors offer a wide array of fresh meat, produce and ethnic specialties.

“Some of the campers had a mango for the first time,” Weltle said. “And they tried smoked sausage, cannoli and other items they had never seen before.”

Weltle adds that he already is planning for 2016. Program size was limited this summer because of a remodeling project in the main dining room, but next year he hopes to increase the number of campers.