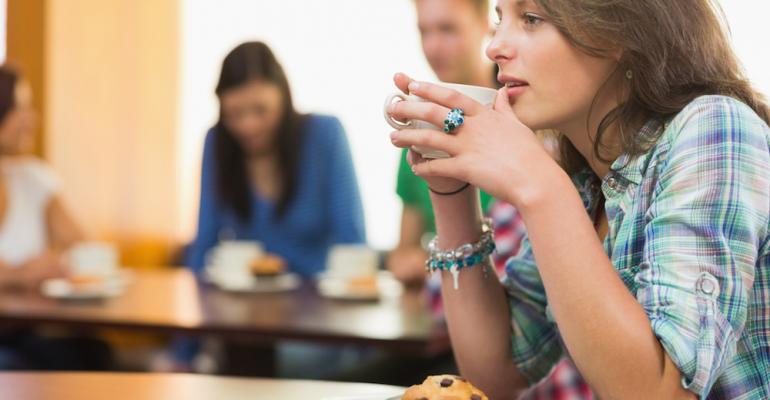 A rise in visits in AM and PM dayparts linked to growth in commuters and two-year college enrollment.

College and university foodservice outlets, excluding on-campus chain restaurant units, saw around 20 million more visits from customers in the year ending March 2016 than in the previous year, for a total of around 1.6 billion visits for the year, according to ongoing noncommercial foodservice market research from the NPD Group.

Breakfast and morning snack visits to cafeterias drove most of the traffic gains, with breakfast/AM snack traffic growing by 7 percent and afternoon snack traffic posting a double-digit visit gain. NPD attributes these increases to a rise in the number of commuter students and higher enrollment at two-year universities.

The growth in morning traffic drove incremental increases in servings of breakfast foods such as eggs and bagels, and many of the top growing foods in college environments were also snack-oriented or healthier in nature, such as main dish salads, non-fried chicken and fruit. Burgers and sides/appetizers were among the food categories that declined in servings in the year studied.

Case shipments from broadline foodservice distributors to colleges and universities decreased by 1 percent in the year ending March 2016 compared to the previous year, which had also seen a 1 percent decline in case shipments, according to NPD’s SupplyTrack service, which tracks every product shipped from major foodservice broadline distributors each month to more than 500,000 commercial and noncommercial operators.

“College and university foodservice operators no longer view students as a captive audience, they see them as customers and are giving them what they want,” offered SupplyTrack Vice President Annie Roberts in a statement accompanying the release of the findings. “With higher education budgets tightening, foodservice distributors and manufacturers can assist C&U foodservice operators by focusing in on their customers’ diverse needs.”