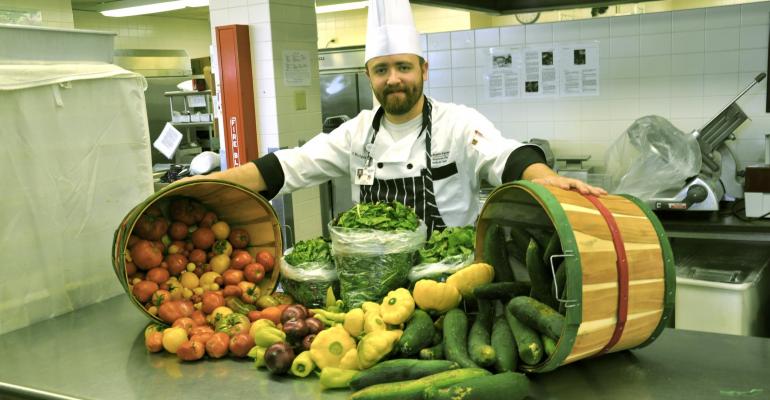 Justin Johnson, fresh off revamping onsite dining at Milwaukee’s Watertown Hospital, is taking his approach to market with his new Sustainable Kitchens venture.

UW Health Partners Watertown has one of healthcare dining’s most aggressive sustainability programs. The architect of the program, Executive Chef Justin Johnson, has announced that he will be leaving the hospital Feb. 6 to launch his own firm, Sustainable Kitchens, which he says will work with clients across the foodservice spectrum to develop programs similar to what Johnson guided UW Watertown to achieve.

And that is considerable as the hospital is a model of a sustainability-first approach, from its philosophy of serving only from-scratch dishes on the patient and retail menus to operating an 11,000-square-foot onsite garden that supplies the kitchen with dozens of varieties of fruits, vegetables and herbs. Johnson, who was brought on board three years ago specifically to oversee this conversion, even added a refrigerated butcher room where fish, chicken and beef are processed as part of a $3 million renovation of the foodservice facilities.

Johnson has already inked deals with three clients, a health center and two commercial restaurants in the Milwaukee area, but he’s looking at that as just the beginning.

How did this venture first start?
I started developing the idea for Sustainable Kitchens last summer, initially with the thought that it would be something I would do on my own time on the side as life my full-time job allowed. But then, touring other hospitals and speaking at a lot of conferences, I started to find that there were a lot of people who were interested in what we had done and were looking to do something similar. So that’s when it started to change in my mind from something I could do on the side to something with which I could make a full-time go. Then in early December I got a call from a local restaurant that was looking to make some larger scale changes for their operation. What they envisioned was a pretty large-scale project and that’s when I started starting putting my ducks in a row and establishing Sustainable Kitchens as a full-time business venture. And then when I started getting the word out, the calls and e-mails started coming in. And I felt that at least in the short term I may have something here and if I do it well and right, I might have a business that could make a big difference long term, not just locally in our Milwaukee area but nationally as well.

You’re certainly leaving quite a changed operation…
I couldn’t be more proud of what I’ve done at Watertown. It was a difficult decision to walk away from a regular paycheck and a job and organization second to none. As far as companies to work for and people to work with, I can say that it doesn’t get any better. But it was a situation where an opportunity arose and I felt that if I don’t jump on it now I never will and I’ll always regret it. So I’m jumping in the deep end and trying to make a go of it.

How does your industry experience come into the decision? Editor's note: Before UW Watertown, Johnson worked in B&I with Sodexo, at a high-end retirement community and as executive chef and F&B director for a major hotel.
My background is a very important part of it because if I didn’t have that kind of established reputation and track record of success, I’d wouldn't be nearly as comfortable jumping into a business like this where I have to be cold calling people and basically being a salesman showing up at people’s doors. But given that what we’ve done at Watertown has been very visible, very well received and very successful, it has given me a clear road into some other centers that are looking for something on the same level.

Would you describe Sustainable Kitchens as a consulting firm or as a contractor?
That’s a really good question. We’re starting out as a consulting service and I’ll initially be doing just project work—staff training, menu and recipe development, operational overhauls, design consulting if there are facility changes that need to be made—but my long-term goal, in the next five years or so, is to grow and build the company into a kind of alternative contract foodservice for noncommercial operations that really value cuisine, food and the people that make it happen. I’m looking at accounts in hospitals, schools, retirement communities, corporate centers and so forth where food is unique to that environment and that demographic, as opposed to being pulled from a mass rolodex of recipes, processes and procedures that will be the same at another account down the road.

So you’re not limiting your reach in terms of segmens?
We’re not discriminating anywhere. It will be interesting to see over the next few months how it grows, but I’m not relegating myself only to the Milwaukee area either. Eventually I’d like to make it a national presence.

Any final thoughts?
I want to clarify that my decision has nothing to do with Watertown’s recent acquisition by LifePoint [the merger, announced last October, received considerable local media play as it was the first time a for-profit hospital chain bought a stake in a nonprofit community hospital in Wisconsin]. This was already in the works before we knew anything about the merger and the timing is more coincidental than anything.