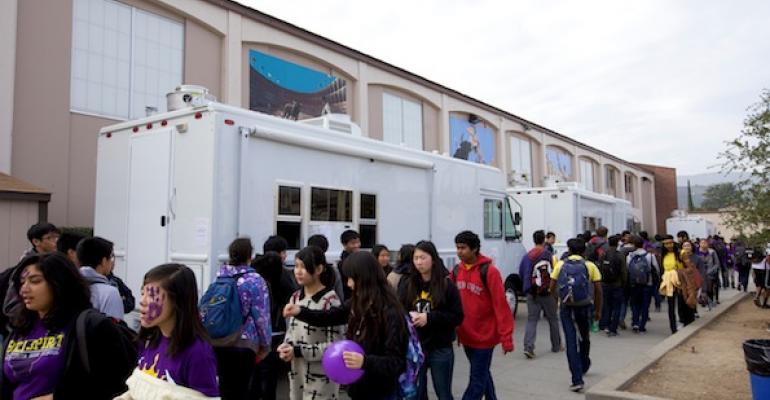 Fremont Union developed its own food trucks to fill the gap while it renovates its cafes.

Fremont (CA) Union High School District is located in the Bay Area’s affluent suburbs between San Francisco and San Jose. Consisting of five high schools with open campuses and a district with free/reduced percentage of only 18%, one can just imagine the participation challenge faced by the meal program.

That challenge has been made even more difficult by aging cafeteria facilities at all five schools. Also there are 50 venues within the five school areas from which students can buy food or beverages for all meals.

Something clearly needed to be done and five years ago the first step was taken as the district passed a $198 million bond issue to fund a series of improvements, including the building of new cafes in all five locations.
That long term project got its first tangible results with the recent opening of the first new café, located inside a new two-story Student Union complex on the grounds of Cupertino High School.

“It doesn’t look like a high school cafeteria,” says Fremont Dining Services Director Bill Schuster. “It’s more like what you’d expect to see in a corporate dining facility or a college dining hall with the café scatter system and exhibition cooking station.”

The menu features hot and cold sandwiches, a rotating menu of made-to-order items prepared in a station with six burners and a grill. Pizza made with healthy ingredients is also a favorite.

The Cupertino High café features roll-up doors that open on an outdoor courtyard with plenty of seating where students can dine al fresco. Every Thursday is Outdoor Barbecue Day.

Participation is averaging around 20-25 percent for lunch, not including a la carte sales, which are significant in the fairly affluent district despite federally mandated restrictions. Daily a la carte choices include a rotating series of entrees, muffins, turkey corn dogs, yogurt, kettle chips, fruit, whole grain chocolate chip cookies, healthy juice drinks and even ice cream that meets federal guidelines.

The other Fremont Union cafeteria projects are scheduled to be completed in the next two to four years, with the next opening slated for April 2014.

In order to provide ongoing meal service at sites where the construction has closed down the cafeteria, Fremont has designed and deployed five food trucks that take up the slack. The trucks are equipped with convection ovens, a burner grill, refrigeration and sinks.  When all projects are done, each school will retain a truck and students will be asked to design a ”wrap” for the truck, to reflect their school spirit.

Their menus feature street foods from around the world theme to give them an edgy and attractive vibe, Schuster says. He notes that the trucks, which are posted near student parking areas, have succeeded in at least maintaining participation levels of around 600 qualified meal sales a day while the cafeterias are closed.

The trucks will continue to be used for student meals, special events, catering, concessions and group rentals after all the construction projects are done.

For a photo gallery of the new cafe at Cupertino High School, go here.

For a photo gallery of the food trucks, go here.