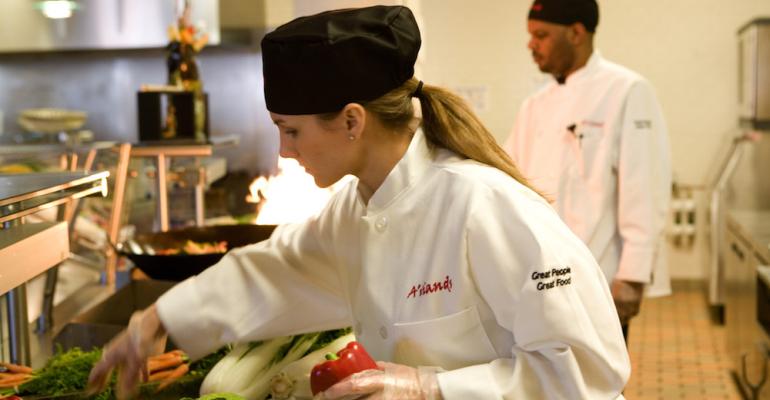 <p>Elior North America will continue to operate at unit level through its individual brands like A&#39;viands, but there will be more visibility of the parent company brand than in the past.</p>
News & Trends

The transition to Elior North America is more than just a name change.

Trusthouse Services is now Elior North America, in a rebranding move to position the company, which placed 6th on FM’s most recent Top 50 Contract Management Companies listing, for further growth in the U.S.

Founded in 2008 by former CEO Michael Bailey through the acquisition and consolidation of three formerly independent contract management companies, TrustHouse had grown impressively from the beginning, rocketing from around $100 million in revenues in its first year to $637 million in 2015. Its expansion was fueled by a spate of fairly major acquisitions, the most recent being the deals last year for STARR Restaurants Catering Group, ABL Management and longtime Top 50 firm Cura Hospitality.

TrustHouse had been acquired by the French firm Elior Group in 2013 but had continued to operate under its original name until this past month, when the company unveiled a major rebranding initiative that emphasizes its connection with the parent company, one of the world’s largest contract catering and concessions firms, with 2015 revenues of $6.4 billion and operations in 13 countries.

Elior is currently the market leader in three significant European nations—Italy, Spain and France—says Elior North America Executive Vice President/Chief Growth Officer Chris Ciatto. It already had a U.S. presence before acquiring TrustHouse through a unit called Areas that operates food concessions in tollway travel plazas and at a number of major airports, including Logan in Boston, O’Hare in Chicago and LAX in Los Angeles.

The decision to undertake the rebranding was driven by several considerations, including new leadership at the Elior group level with new Chairman/CEO Philippe Salle and new US leadership with Brian Poplin, who succeeded Bailey as CEO last year, says Ciatto. The company was also planning four acquisitions, taking the brand portfolio to over 10 unique brands.

“So we asked ourselves the question, ‘how could we tell our story in a more coherent way and should we build upon the TrustHouse brand or look in a different direction?’ With the help of an outside agency we did some validation and came to the conclusion that linking with the Elior Group brand and doing it at this time made a lot of sense,” Ciatto says.

Like fellow European-based firms Sodexo and Compass Group back in the 1990s, Elior Group sees America as the land of opportunity.

“They see the U.S. market as a very important place for them to establish a presence and that’s why they bought into TrustHouse,” Ciatto explains, “and we want to support that initiative for them by reflecting their brand in this important market.”

The United States is “the largest and least outsourced of all the markets around the world,” he notes, “so there are strong opportunities here for a variety of players and we think there’s an even stronger opportunity for ourselves focused on the mid-sized organizations.”

“We’re not necessarily pursuing the largest in the segments we play in. We’re trying to serve a group of clients that we think are underserved today. They may not be large enough to gain the full focus of the big guys and they may be requiring support and solutions that the smaller players don’t have access to.”

The company is also broadening out from markets Bailey originally targeted.

“When Mike founded the company, he saw the signals of the recession coming and he consciously went into more resilient segments—healthcare, corrections, education—and we’ve been consciously building up our presence in those markets,” Ciatto explains. “But as one can see in this past year with our acquisition of STARR, we’re adding to our segments. We have a strategic roadmap that takes us into more segments over time, and deeper.” Ciatto says the company is also ramping up its B&I portfolio.

He notes the significant growth experienced by Starr Catering since its acquisition last summer, attributing it in part to the company’s access to greater resources previously unavailable to it. “We’re very pleased and we’re focusing on trying to build up that high-end B&I and cultural attractions component of our business.”

Ciatto says the new company name will have more visibility than did TrustHouse, which remained mostly in the background as the company operated locally under the titles of the firms it had acquired, which had established name recognition and brand equity in their particular markets.

“Linking our U.S. companies together and then linking them to the global parent connected us to some real assets, some real culinary assets that were broader than what TrustHouse as a holding company had,” he notes. “For example, Elior is very forward thinking in sustainability,” he says, noting that the company had recently served as catering sponsor of the COP 21 United Nations Paris Climate Conference last year. It has also done substantial research on topics like global food trends and millennial eating habits.

“We get to take advantage of all that,” Ciatto says. “There are a great number of culinary concepts that have been developed, so we’re forging a better link and we’re symbolizing that link through the brand.”

He stresses that the operating company names will remain the primary identity customers see, but those brands will also now reflect the Elior name so that they are identified with the parent company and with each other.

“In the past, you may not have known that A’viands and Aladdin were sister companies,” Ciatto says. “We’re going to make that more evident in this new branding scheme. It will now say ‘A’viands an Elior Company’ and ‘Aladdin an Elior Company,’” so we’re making it pretty clear.”

He says the marketing will also have a more consistent look and feel though the individual company identities will still be there.

“We believe in the local teams supported by global resources,” Ciatto summarizes.